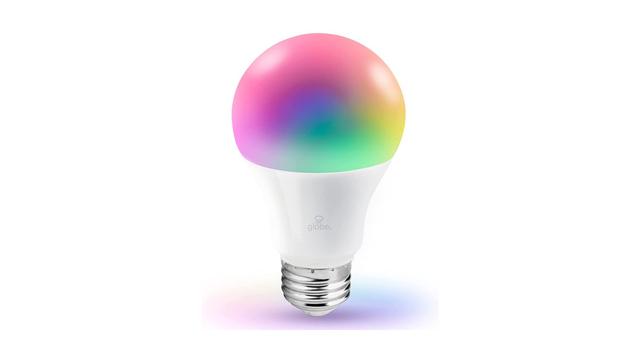 Globe Electric’s Wi-Fi Smart 10-Watt Multicolor LED Light Bulb ($30.99 for a pack of two) offers an easy way for you to add colorful mood lighting to any room. In addition, you can use its intuitive companion app to create usage schedules and customize various lighting effects, and you can control the bulb with your voice via Alexa, Google Assistant, and Siri. We like that it doesn’t require a hub, but it’s more expensive than our Editors’ Choice winner, the Wyze Bulb Color ($20.99 for two), and it doesn’t integrate with nearly as many third-party devices.

The Globe smart bulb is an A19-shaped bulb with an E26 base that fits most standard lamp and fixture sockets. The dimmable LED bulb carries a brightness rating of 800 lumens, roughly equivalent to a 60W incandescent bulb in terms of output. Rated to last up to 15,000 hours, it is capable of displaying millions of colors and has an adjustable white temperature range of between 2,000K and 5,000K. For comparison, the Wyze bulb (1,100 lumens, 1,800K to 6,500K) is brighter and capable of showing a wider range of white light. 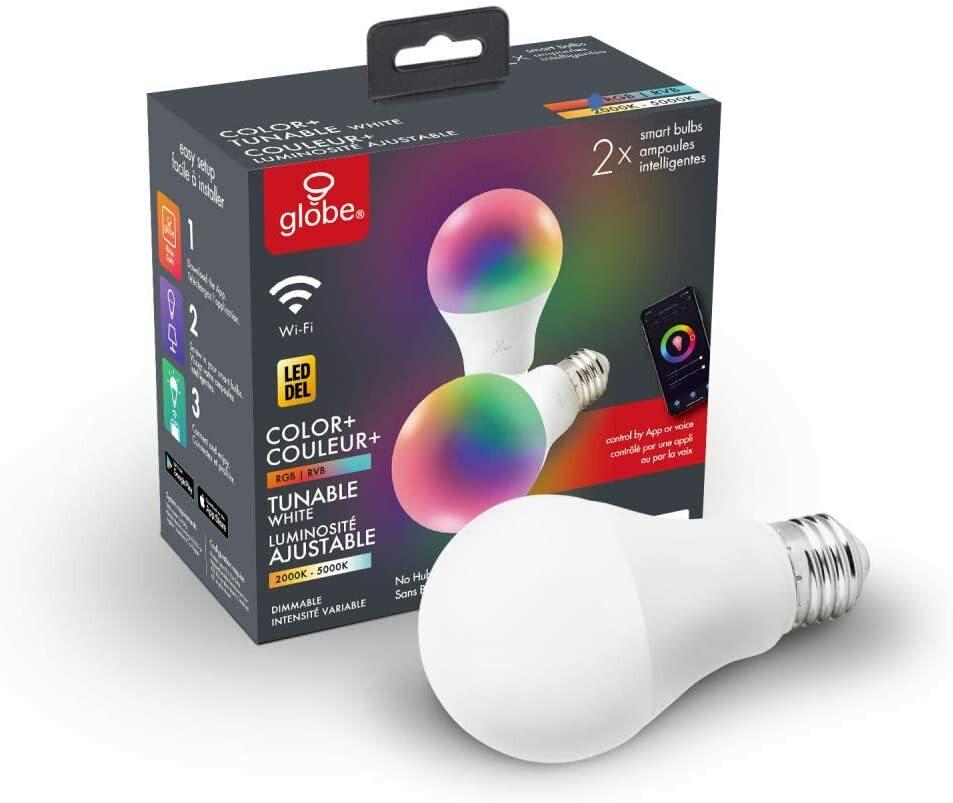 Like the Wyze model, the Globe bulb doesn't require a hub. Instead, it connects to your phone via Bluetooth and to your home network via the onboard 2.4GHz Wi-Fi radio. It works with Alexa and Google Assistant voice commands; Siri voice shortcuts; and SmartThings home automation systems. Additionally, you can configure the bulb to interact with other Globe devices via the Smart Scenes feature in the companion app. Unfortunately, it doesn't work with either the Apple HomeKit or IFTTT platforms.

The bulb appears in a dedicated tab on the main screen of the Globe Suite app (available for Android and iOS). The screen has a small power button that glows green when the bulb is on and gray when it is off. It also displays the brightness level, as well as either the white color temperature or RGB value.

At the bottom of the screen are Home, Smart Scenes, and Profile buttons. The Home button takes you back to the main screen from any place in the app. The Smart Scenes button enables you to set the bulb up to interact with other Globe smart devices. Here, you can also specify usage schedules; instruct the bulb to react to environmental conditions (weather, sunrise, or sunset); configure a geofencing perimeter; and create a shortcut button. Tap the Profile button to edit your information; link to Alexa, Google, and SmartThings accounts; and enable notifications and alerts.

Back at the home screen, you can tap on the bulb’s panel to open a Light screen where you can set the bulb’s white color temperature and brightness. Alternatively, you can select one of seven color temperature presets. Tap the Color button at the bottom of the screen to switch to a color dial that offers brightness and saturation sliders in addition to the seven color presets.

Simple to Set Up and Use

Installing the Globe bulb was painless in testing. I downloaded the Globe Suite app, created an account, and tapped OK when the Add Device screen appeared. I screwed the bulb into a lamp socket, tapped Add Device, and allowed my phone’s Bluetooth radio to search for the bulb. Once the bulb began to flash, the app immediately recognized it and prompted me to provide my Wi-Fi SSID and password. After a few seconds, the bulb connected to my Wi-Fi network, thus completing the installation.

The Globe bulb responded quickly to changes from the mobile app (switching between the white and color RGB modes, for example), Alexa voice commands, and Siri shortcuts. Colors are rich with good saturation, and white color settings look appropriately warm and yellowish at lower temperatures and cool and bluish at higher settings. The bulb followed my schedules without incident, as well as my Alexa routines. A Smart Scene I set up for the bulb to turn on at 50% brightness when a Globe smart plug turned off performed fine as well.

With the Globe Electric Wi-Fi Smart 10-Watt Multicolor LED Light Bulb, you can create custom mood lighting or use one of the preset scenes to add color to any room in your home. It worked well in testing and we like how easy the app is to use, but it's a bit pricey. Competing models such as the $12.99 Treatlife Smart Wi-Fi Color Bulb and the aforementioned Wyze Bulb Color are more affordable, and the Wyze Bulb offers substantially more third-party integration options, making it the best buy for the price and our Editors' Choice winner.