Switching phones is often accompanied by the cumbersome task of transferring data like contacts and more from one device to another. And if you’re making a shift from an iPhone to an Android mobile phone or vice versa, it might seem like a challenge as there is no one-click data transfer process between the two just yet. But fret not! There are quite a few ways that can make the migration between Android and iOS a seamless experience for you. Below is an easy step-by-step guide on how to transfer contacts from Android to iOS or iOS to Android.

How to transfer contacts from one phone to another

Whether you’re making a transition from iOS to Android, or replacing your existing Android phone with an iPhone 13 or any other earlier model, a Google account can make it easy for you to move your contacts from one device to another. Read on to know more about it and various other ways to transfer your contacts between Android and iOS phones.

If you’re an Android user, here’s how you can move your contacts to an iPhone: 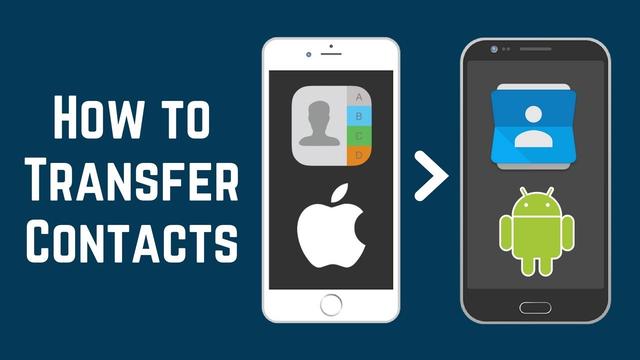 Developed by Apple, the Move to iOS app specifically serves the purpose of helping Android users transfer their data including contacts to a new iPhone at the time of setup.

Google account is a common space that works with both Android and iOS devices. Hence, it is one of the easiest options for transferring contacts from one phone to another.

PDF in my mobile: How to make PDF file on Android mobile phone and iPhone

How to get paid apps for free on Android

Also known as a vCard, a VCF file is an Internet standard for storing contact information. You can simply click and save and easily read a .vcf file that is sent to you by mail or SMS.

Making a move from iOS to Android? Read on to know how you can transfer contacts.

The best possible way to completely transfer all the data including contacts on your iPhone to your new Android mobile phone without SIM is by syncing it all to Google Drive.

Besides syncing the contacts to Google Drive, you can also sync your contacts to Gmail. But, note that Gmail account has to be pre-enabled on your iPhone to follow this process.

Yes, it’s true! You can use iCloud to transfer all the contacts on your iOS device to your new Android phone via a VCF file. As stated earlier, a VCF file can be read by every phone.

In addition to these official ways, there are a plethora of third-party apps available on both Android and iOS that help you migrate the contacts from an Android phone to iPhone and vice versa. Most of these apps allow you to backup contacts on a VCF file and send them as an email attachment. You can simply download it to import contacts on your new phone.