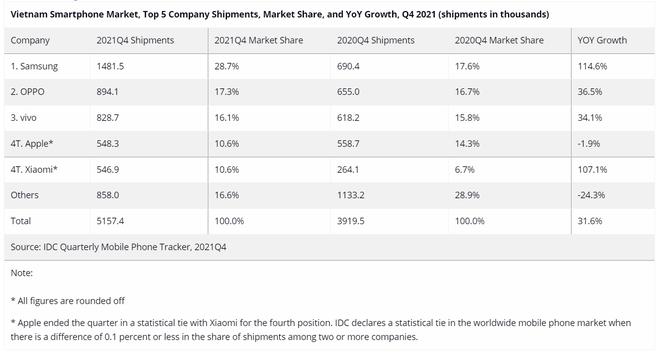 Vietnam’s Smartphone Shipments Grew 12% in 2021, and IDC Expects 25% Growth in 2022 Driven by Migration from 2G Feature Phones to 4G/5G Smartphones

HO CHI MINH CITY, March 1, 2022 –Vietnam’s smartphone shipments grew by 11.9% to 15.9 million units in 2021, according to the International Data Corporation’s (IDC) Quarterly Mobile Phone Tracker. This was driven by 4G phones, following a ban on the imports of 2G and 3G mobile phones from 1 July 2021, as well as high pent-up demand in the fourth quarter of the year following pandemic lockdowns in the second and the third quarter. Vendors shipped a total of 5.1 million units in 4Q21, up 107.3% quarter over quarter (QoQ) and 31.6% year over year (YoY) when the authorities started to take a step-by-step approach to restore social and economic activities.

“Vietnam faced its first major lockdown since the start of the pandemic in major cities through September 2021, making a big impact on the smartphone market due to the closure of shops and malls,” said Thanh Vo, Research Analyst at IDC Vietnam. “The smartphone market gradually became active again in the last quarter of the year, as there was a significant pent-up demand, helping stores' sales recover. However, component shortages started to have a meaningful impact on the market,” added Thanh.

The key themes that will shape the Vietnam smartphone market in 2022 include:

1) Continued migration from 2G/3G to 4G/5G mobile phones, resulting in Vietnam having the highest growth in the smartphone market amongst the ASEAN countries in 2022 as smartphone adoption picks pace.

3) A change in the retail landscape as the vendors opt for brand-exclusive stores. The mobile phone market in Vietnam is distinct from the rest of ASEAN as it is dominated by a few major mobile phone chain stores such as the Mobile World and the FPT Shop. This makes it tough for the smaller stores to compete with these companies. These chain stores, on the other hand, differentiate themselves on pre and post purchase services or partner with vendors by opening the brand-exclusive stores.

Samsungheld a market share of 28.7% in the fourth quarter of the year. On an annual basis, Samsung won a bigger share of the smartphone market in 2021 with strong growth in its low-end portfolio. It shipped 5.3 million units, increasing 27.1% YoY, as its share increased to 33.3% in 2021 from 29.3% in 2020. While Samsung has been growing its share in other channels, much of the expansion in 2021 was through retail channels where Samsung started to expand through single-brand stores.

OPPO,at the second slot, accounted for 17.3% share of the smartphone market in the fourth quarter of the year. OPPO's A95 and A55 made a high contribution to OPPO's shipments in 4Q21, while the Reno series was also enjoyed well-received.

vivotook the third slot in the last quarter of the year, launching a range of new smartphone models. It held a market share of 16.1%. On annual basis, vivo's unit shipments grew 29.4% YoY reaching a market share of 11.7% in 2021.

Applewas in the fourth position in 4Q21, shipping 548 thousand units, declining by 1.8% YoY. Despite the supply constraints, its iPhone 13 lineup performed well and was the major volume driver in the fourth quarter of the year as Apple expanded its presence with its retail partners in the country. Apple is expanding its retail presence with single-brand stores such as Apple Authorized Resellers and Apple Premium Resellers run by local partners such as Mobile World and FPT Shop.

Xiaomi’sshare increased to 12.7% in 2021 from 8.3% a year ago, reaching over 2 million units. Its entry-level models, the Redmi 9A/9/9C/9T, were the major volume drivers. The MI 11 had a higher contribution to total Xiaomi's shipments compared to the Mi 10 series, which had very limited shipments in 2020.

IDC Trackerproducts provide accurate and timely market size, vendor share, and forecasts for hundreds of technology markets from more than 100 countries around the globe. Using proprietary tools and research processes, IDC's Trackers are updated on a semiannual, quarterly, and monthly basis. Tracker results are delivered to clients in user-friendly excel deliverables and online query tools.

International Data Corporation (IDC) is the premier global provider of market intelligence, advisory services, and events for the information technology, telecommunications, and consumer technology markets. With more than 1,200 analysts worldwide, IDC offers global, regional, and local expertise on technology, IT benchmarking and sourcing, and industry opportunities and trends in over 110 countries. IDC's analysis and insight helps IT professionals, business executives, and the investment community to make fact-based technology decisions and to achieve their key business objectives. Founded in 1964, IDC is a wholly owned subsidiary of International Data Group (IDG), the world's leading tech media, data, and marketing services company. To learn more about IDC, please visit ww w .idc.com. Follow IDC on Twitter at @IDCASEANand LinkedIn. Subscribe to the IDC Blogfor industry news and insights.

Copy the following code into your site 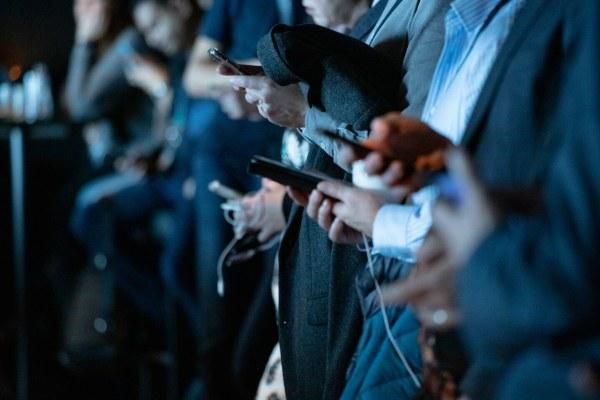