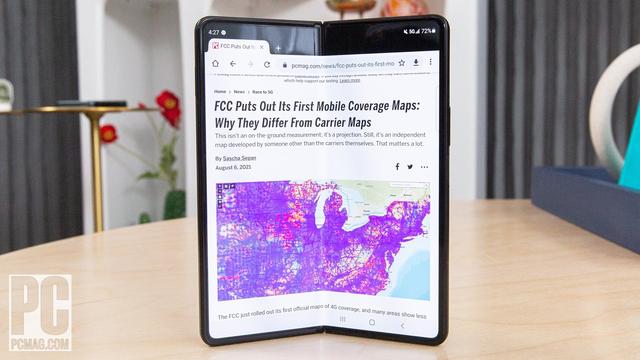 I’m always a fan of good gimmicks. This was true when I reviewed the Samsung Galaxy Z Fold2, and it remains true with the Samsung Galaxy Z Fold3 5G. Any phone that can do something to stand out in a sea of other smartphones stands to be celebrated. Sometimes these features aren’t as obvious at first glance, but obviously a phone that folds out into a small tablet is a little more in your face.

Coming in three colours, Phantom Green, Phantom Silver and Phantom Black (the device tested), the Z Fold3 looks sleek and professional, even if it’s somewhat bulky. This is not a small device you can just slip in your pocket and forget about. It weighs 271 grams, and without a case, is surprisingly easy to drop. The good news? It is very resilient, though I do not recommend risking it. After weeks of testing, there is barely a smudge on the smartphone. It held up surprisingly well in a world where a toddler stole it regularly.

The front screen is narrower than most smartphones, and I find apps like TikTok are often cut off. I do like the choice between which screen to use, which even works with games like Fortnite, and that the Samsung Galaxy Z Fold3 5G will adjust quickly and easily if you choose to switch screens while an app is open. The cover screen supports ‘Always on Display’ and there are no limits to what you can do with it, making it more versatile than the front screen on the Samsung Galaxy Z Flip3, but the picture quality won’t be what you’d get from a regular smartphone screen, like the Samsung Galaxy S22 Ultra.

The main display of the Samsung Galaxy Z Fold3 5G is the device’s claim to fame, and rightfully so. The colour and picture quality are vibrant and clear, making videos, games and photos really stand out. The line down the centre of the screen is still there, but unless you look at the Z Fold3 from an angle or when the screen is black, you’ll rarely notice it.

Though the keyboard in this mode takes a bit of getting used to, having the ultra-wide screen for reading, typing or viewing any sort of media is very useful, and the Z Fold3 takes full advantage of the space it delivers. Almost all apps will fill the screen, with only a few centring down the middle.

“The main display of the Samsung Galaxy Z Fold3 5G is the device’s claim to fame, and rightfully so.”

If you charge your phone overnight or when you’re sitting at your desk, the Samsung Galaxy Z Fold3 5G will get you through the day. By bedtime, the device is usually on its last legs. After a day of Facebook, emails, other social media and texting, the battery doesn’t hold up well. I typically needed to give the phone a little boost during the day with a USB-C charger, and it averages charging about two minutes per percent. It also works well with wireless charging devices, and doesn’t sacrifice charging speed to do so. 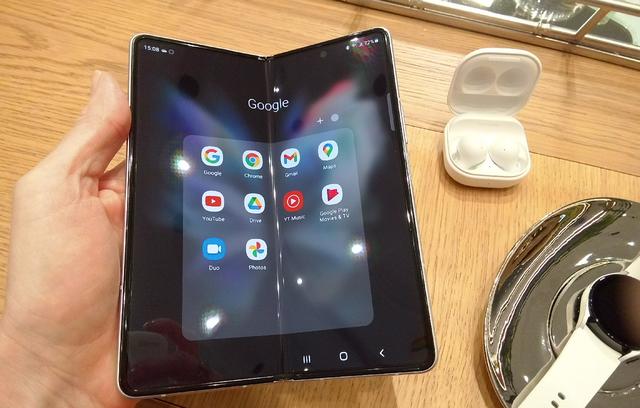 With 12 GB of RAM and either 512 or 256 GB of internal storage, the Samsung Galaxy Z Fold3 is quick and can store thousands of photos. If you want to store more, unfortunately, you’ll need to look elsewhere. The Z Fold3 does not have an SD card slot.

At a time in history where people are constantly capturing moments and content creation is at its peak, I think not being able to upgrade the phone’s storage is an oversight. The phone can handle some light gaming, but the quality isn’t the best. Fortnite worked well on both screens and the game ran smoothly enough, but the graphics aren’t the best on the market.

The sound on the Samsung Galaxy Z Fold3 5G is decent enough with Dolby Atmos technology and ultra-high quality audio featuring 32-bit & DSD64/128 playback support. Though it isn’t as rich as a proper pair of earbuds or speakers (which connect seamlessly via Bluetooth), the sound can absolutely fill a room and calls come across crisp and clear. The High AOP microphone captures voices and other sounds well on phone calls and in video.

The rear camera on the Samsung Galaxy Z Fold3 is by far the best of the three. Though they won’t be the highest quality—especially compared to the 40MP selfie camera on the S22 Ultra—the images can be vibrant and sharp, so your family photos will still stand out. I wouldn’t recommend this phone to someone who wants to take any sort of professional photos, though.

Another strange thing to note is that for anyone who likes apps like TikTok, for some reason, the Samsung Galaxy Z Fold3 is not compatible with its filters. This is a known issue with the Samsung S22 line as well. On any camera, you cannot test out the latest trends in the app. Something I did like, however, is that when you take a selfie on the front screen you can actually unfold the phone and use the 12MP rear camera for selfies instead of the 10MP cover camera. This is a nice touch, though holding the phone in this position is tricky because of its size.

It’s important to pick a smartphone that suits your needs, but I’m still not sure who the Fold series of devices is meant for. At a jaw-dropping price north of $2000 CAD, it likely isn’t geared toward students, or young adults, but the performance isn’t outstanding for professionals either.

Sending emails and texts is a little trickier than on standard phones, with the keyboard being either very spaced out or tiny depending on which screen you’re using, so its functionality doesn’t lend to being efficient. The phone works well, the cameras are only alright, (though I do love the quality of the close-ups) and the learning curve is high. Aside from it being a fun device to show off and watch videos on, it doesn’t seem to have a specific niche in mind,

I don’t require a lot from my smartphone. I’m not a photographer or content creator. I check emails, browse social media, and take photos of my kids. The Samsung Galaxy Z Fold3 is a lot of fun to play around with. I love watching videos on it, and the large inner screen looks great for any media. For anyone who needs more than that, the Galaxy Z Fold3 5G is probably not the phone for you. Though it does what it should, and meets minimum expectations, it is bulky, and doesn’t master any one feature enough to make up for its faults or the price.