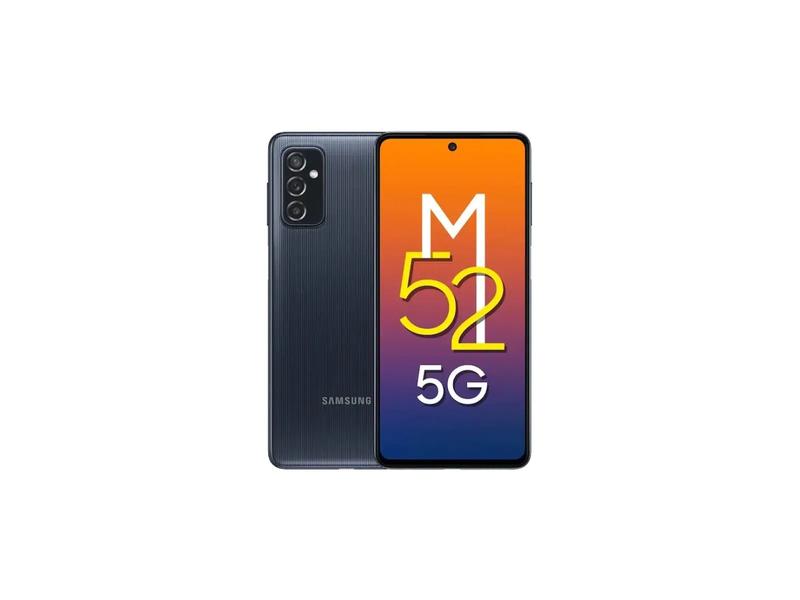 Samsung has been aggressively adding 5G connectivity to its mid-budget smartphones, and the Samsung Galaxy M52 5G is a testament to that commitment. On paper, the phone comes with various eye-catching features that include a large 6.7-inch screen with 120Hz refresh rate, a 5,000mAh battery, and a 32-megapixel front camera. But above all, the company is flaunting the device’s sleek design that measures 7.4mm in thickness - 21 percent sleeker than the old-gen Samsung Galaxy M51. All these come with a starting price tag of Rs 29,999 for the 6GB RAM + 128GB storage variant and Rs 31,999 for the 8GB + 128GB option. The two models are also available with a discount on Amazon and Flipkart for a limited period.

For our review, we tested the top-tier 8GB RAM variant that adopts a charcoal grey finish, namely ‘Blazing Black.’ The Samsung Galaxy M52 5G also gets an Icy Blue colour option. With a price tag of around Rs 30,000, the phone will compete against equally popular devices like Xiaomi Mi 11X 5G and OnePlus Nord 2 in India. Before we offer our verdict, here’s what you need to know about the smartphone:

Design and display: As mentioned, the phone comes with a 6.7-inch Super AMOLED Plus display that has Full-HD+ resolution (1,080×2,400 pixel) and 120Hz refresh. Since there’s no adaptive refresh rate, users can choose between the standard 60Hz or 120Hz only. At first glance, the Galaxy M52 5G easily passes off as any premium-looking smartphone in the market. Despite a large screen, the sleek form factor does create a difference, and the Galaxy M52 5G does not appear like a clunky brick. Additionally, it weighs barely 173 grams, 23 grams lighter than the Mi 11X 5G and 16 grams lighter than OnePlus Nord 2 5G.

Coming to the display performance, the Galaxy M52 5G offers adequate brightness and deep blacks suitable for both outdoor and indoor settings. For a company that champions display tech, the performance was crisp, and we managed to binge-watch several shows on OTT platforms without any complaints regarding colours. The Samsung Galaxy M52 5G also features a polycarbonate body that gives a glass-like appearance. Users will still get a smooth glossy finish on the rear panel but be vary of smudges and even scratches. In that case, a protective case may just suffice. Having said that, a phone with a large screen and sleek design will still find it difficult to fit into the deepest trouser pockets. But a beautiful patterned design on the back and slim look easily overcome these tiny drawbacks.

Performance and software: The Samsung Galaxy M52 5G carries the 6nm Qualcomm Snapdragon 778G octa-core chipset that offered a smooth and efficient performance during our test. We were able to carry forward daily tasks like web browsing, emails, social media, and even heavy gaming. With four to five apps running in the background, the phone did not face any issues - mind you, all this with the maxed out 120Hz refresh rate. We also played notable racing and action titles like Asphalt 9 and Garena Fire Max, at times, switching back and forth, and the 8GB RAM managed to run both apps with minor stutters. During our gaming sessions, the phone (at least indoors) did not face any heating issues.

However, Samsung Galaxy M52 5G comes with loads of bloatware that make the initial experience cluttered. The third party apps like Snapchat, Amazon, and Facebook are removable, so make sure you decide what to pick. Brace yourself for occasional promotional notifications from the Galaxy Store as well. With the latest Android 12 OS around the corner, let’s see how long Samsung will take to upgrade the Android 11-based One UI 3.1 on the phone. 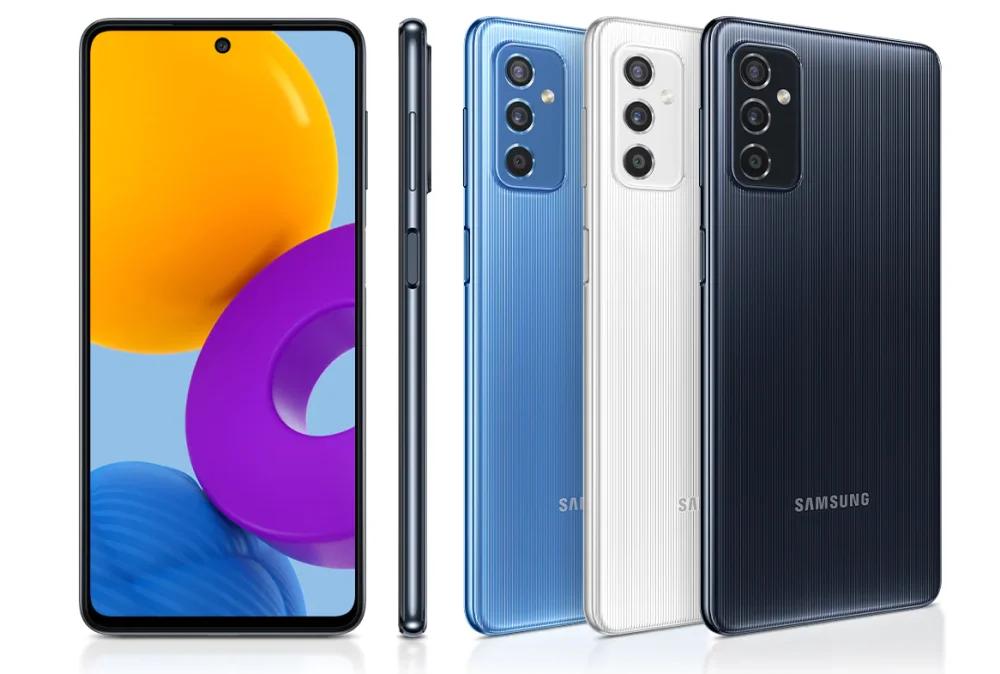 In terms of the Geekbench CPU benchmark, the phone’s single-core test falls short against mid-budget rivals like MediaTek Dimensity 1200 SoC but does better in the multi-core performance. For customers planning to buy a decent phone around the Rs 30,000-mark, the Samsung Galaxy M52 5G easily manages daily tasks like social media and web browsing without worrying about lag issues.

Camera: Unlike quad rear cameras on the Galaxy M51, the successor Samsung Galaxy M52 5G comes with triple cameras at the back inside a rectangular module that has a negligible bump. However, like the old-gen smartphone, the new device does not deliver an outstanding camera performance. Most photos during our test were strangely sharp and high saturation levels on Galaxy M52 5G again lingers. We had similar experiences with Galaxy M51 and Galaxy A52s 5G. Additionally, the tertiary 5-megapixel macro camera was just not able to deliver a sufficient performance.

To clarify, that does not mean the performance of the rear cameras was poor, but photography enthusiasts will miss natural colours (and some tweaks) on their photos and videos. For customers who enjoy occasional photography at family functions or trips, the rear cameras (64-megapixel main + 12-megapixel ultra-wide + 5-megapixel macro) on the Galaxy M52 5G will deliver a decent quality without needing to care about applying the right filter. Coming to the 32-megapixel front camera, you wouldn’t get grainy photos, but the saturations levels are again way too high. In most daylight conditions, the front camera on the Galaxy M52 5G made the skin look too fair - lacking natural colours and details. But that also means that low-light selfies turn out to be reasonably good. Customers who enjoy taking selfies might want to pay attention to this.

Battery: Over the years, Samsung phones have been coming with batteries that seldom fail to deliver. Similarly, the Samsung Galaxy M52 5G exceeded expectations when it comes to the battery - in one case, more than what the company claimed. Samsung says that users will get up to 17 hours of internet usage time, but we even managed to get roughly 20 hours that includes gaming at high refresh rate. Throughout our test, we barely used the phone with the standard 60Hz refresh rate.

However, Samsung is not particularly known for fast charging tech, and similarly, the Samsung Galaxy M52 5G supports 25W fast charging - not the fastest in the market. It comes bundled with an 18W charging brick. With the latter, it took few minutes over an hour and a half to fully charge. Whereas, an hour of charging fetched 62 percent battery. For perspective, the OnePlus Nord 2 5G supports Warp Charge 65 and the Mi 11X 5G supports 33W fast charging. However, the other two phones also come with smaller batteries.

Verdict: As a whole, the Samsung Galaxy M52 5G deserves much attention, especially when there’s already a Galaxy A52s 5G in the market with similar specifications. Mind you, the Samsung Galaxy M52 5G is more affordable and lacks features like IP67 rating or quad rear cameras, unlike Galaxy A52s 5G. There may be some who’d prefer OnePlus Nord 2 5G over competitors as it does tend to perform better in some areas like cameras and fast charging. However, Samsung’s after-sales service is also worth considering at this price point.

Personally, the Galaxy M52 5G exceeded many expectations in terms of build quality and overall performance. It did stumble in other areas like face unlock that hardly works in low light conditions. The fingerprint scanner that comes integrated into the power button isn’t always responsive either. Additionally, there’s no storage option beyond 128GB but users can expand memory with up to 1TB microSD card (sold separately). Having said that, if you’re planning to buy a new phone this sale season, it is your best chance to get the latest-gen phone with future proof 5G connectivity. To sum it up, Galaxy M52 5G has made the mid-budget phone wars just better with a value for money performance and great battery life.