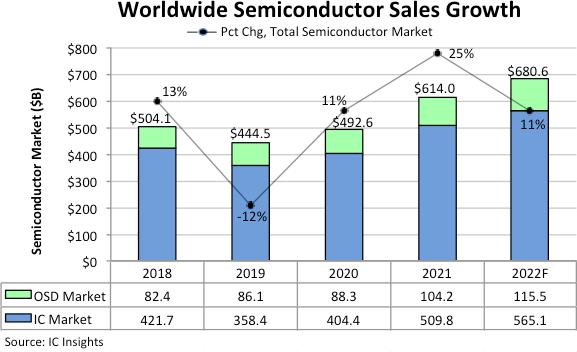 The Semiconductor industry has recently made headlines, thanks to supply chain constraints and global shortages. During 2021, over 11 million vehicles had to be removed from production due to Semiconductor shortages, according to Statista.

This has further cemented into people's minds the importance of semiconductors in our life, from consumer electronics to our cell phones and even the heated seats in your car, they all require semiconductors. Strong demand for semiconductors caused global revenue to soar by over 25% in 2021 and is forecasted to grow by a further 11% in 2022, according to IC Insights. Our thirst for Semiconductors is set to continue, driven by new 5G cell phones, portable technology (Apple watches etc.), data center growth and even an increasing number of IoT (Internet of things) devices.

Micron Technology (NASDAQ:MU) is poised to benefit from these trends as the 4th largest semiconductor company in the world. The firm is one of only a handful of semiconductor manufacturers with the capability to produce DRAM Chips, you may have seen these brands Micron & Crucial if you've ever upgraded your laptop RAM (Random Access Memory).

5G cell phones are an especially interesting tailwind for the company, as they have 50% higher DRAM (Dynamic Random Access Memory) and double the NAND content versus 4G phones. 5G smartphone revenue is expected to reach $337bn for the industry by 2025, up from $108bn in 2021, according to Juniper Research.

Micron makes 71% of its revenue from DRAM and 26% from NAND which is used in Solid State (Hard) Drives (SSD). These have many applications including, computers, mobile, automotive and even cloud data center storage.

Data centers are a large & growing market for memory and storage, driven by investment by Enterprise IT. Micron has benefited from these tailwinds with Data center revenue growing by 70% year over year.

The share price is down 23% from its highs of $96 per share in February 2022 and seems to have found support, at the $70 range bouncing back by 5%. In this post, I'm going to dive into the firms business model, technical prowess, financials and valuation.

Micron has 13 Manufacturing sites, 14 customer labs and 40,000 team members. They have multiple sites internationally: HQ in Idaho, USA, UK/EUROPE, India, Malaysia, Taiwan, Singapore, Japan, China. This global presence adds diversification to the company's operations and they are not just mainly in Taiwan like some Semiconductor companies.

The firm is very self aware and states, "Our Success is Largely dependent on":

As a technology company, the firm must continually innovate to stay ahead, thus they are investing heavily into R&D (10%) of revenues, approximately $2 billion per year. So far their investments are paying off and the firm has a high 14.6% return on capital.

Micron's goals include continually reducing manufacturing costs & increasing density per wafer, so far they are doing this exceptionally.

Micron has over 44,000 patents and advanced manufacturing technology, which is vital for Semiconductor manufacturers. 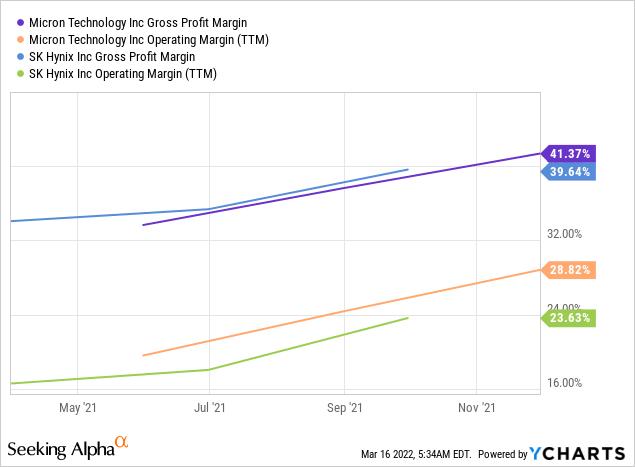 The company has recently pioneered the "World's most advanced DRAM process technology" , called the 1-alpha. This allows a massive 40% improvement in memory density and a 15% drop in power usage. The semiconductor game is all about fitting as many transistors as possible into a smaller area, reducing power consumption and increasing performance. Micron is winning on wall fronts. The 1-alpha DRAM process offers a 40% improvement in memory density along with a 15% drop in power consumption.

They are also ahead of their competitors in many technological areas. For example, their 176-layer NAND went into production in Q4 2020, 6 months in front of SK Hynix and 8 months ahead of Samsung (OTC:SSNLF). Recently Micron's 1-alpha DRAM went into production in Q1 2021, a full year ahead of SK Hynix & Samsung Electronics. In terms of cell size, Micron comes out on top with a 66.26 mm2cell smaller than Samsung's 73.58 mm2and SK Hynix's 75.21 mm2.

Micron has produced strong results in the prior year with revenue jumping 29% from $21 billion to $27 billion. For Q1, revenue by unit was down 10% over the quarter, which is most likely why the stock sold off. This looks to be an overreaction by Wall Street given revenue is up 34% year over year.

The firm has high Gross margins, which have increased to 41.4% of the revenue, slightly above their closest competitor SK Hynix.

Net Income increased by an amazing 118% from $2.7 billion, to $5.9 billion. The firms cash position also increased substantially to $8.6 billion. The company also announced to be buying back ~$7 billion worth of stock and eliminating the dilution from convertible debt. This is a great sign to see and shows management is bullish on the company's prospects.

I have plugged the latest financials into my valuation model, which uses the DCF method for valuation. I have estimated conservatively that the firm will grow revenues 25% next year (they have grown revenues by 29% in the year prior). Afterwards, I have predicted revenues to grow at 15% for the next 2 to 5 years (most analysts predict 23%). I have also estimated margins to maintain stable at 24%, they actually are increasing.

Given these factors I get a fair value of $111/share, the stock is currently trading at $73/share and thus is 35% undervalued.

The firm is also trading at one of the lowest P/E ratios and EV to EBITDA ratios over the past year.

The P/E Ratio looking backward is 6.5, is much lower than the US Semiconductor industry average 15. From the competitor analysis I have completed below, the firm has one of the lowest PEG ratios and is comparable to SK Hynix in terms of size and growth.

The CEO & board all own shares in the company which is great to see. However, this is fairly low at just 0.081% of shares by the CEO. I would ideally like to see a larger insider holding. In addition, I noticed some insider selling at $90/share in Q1 2021.

If there is a production issue & the company doesn't keep innovating, then they may fall behind & lose business. This would be comparable to what happened to Intel when they fell behind with their 7nm chip.

The firm has a complex supply chain with 13 Manufacturing sites and 14 customer labs across the USA, Europe, India, Malaysia, Taiwan, Singapore, Japan and China. Thus with supply chain constraints and the trend toward "deglobalization" there is a lot of room for things to go wrong.

China has increased semiconductor production and wishes to become independent electronically. According to Micron's Investor presentation:

Basically the Chinese government can back local companies and then undercut Micron. China has also been poaching talent from Taiwan and there are increasing geopolitical tensions in the region. The Ukraine Russia Crisis, has caused a comparison to be drawn between Taiwan and China. However, China's foreign ministry has responded strong in Feb 2022, they stated:

Increasing Tensions or even war in the region could affect Micron substantially. Although the firm does have facilities in Idaho in USA, the UK/Europe and other parts of the world which should help to mitigate damage.

Micron is a fantastic company and a true leader in the Semiconductor industry. The firm is ahead of its competitors in many technological areas and continues to innovate. They are growing fast with increasing margins. The semiconductor industry is tremendously fast paced, volatile and cyclical, thus I would expect lots of this moving forward. The valuation is looking tasty after the company had a bad quarter and thus could be a buying opportunity for the long term investor.