iOS 16: Everything there is to know right now

Apple’s iOS updates are like clockwork, with a new iPhone-focused update every year since the inception of the iPhone to help improve the experience on offer.

Apple’s latest official release, iOS 15, brought with it a number of much-needed changes to the notification system, as well as the introduction of the Focus system, an overhauled FaceTime experience and more, but it's safe to assume Apple is hard at work on iOS 16 behind closed doors.

We round up all the latest rumours and leaks about Apple’s next big iOS update, iOS 16, right here.

When will iOS 16 be released?

iOS 15 was released in September 2021, so it’ll be some time before iOS 16 will grace our iPhones. But with that being said, we do have a very good idea of when it’ll be announced and when it’s likely to be released, because Apple tends to stick to the same schedule every year.

What’s that schedule? Apple tends to first announce the next version of iOS at its yearly developer-focused WWDC event that takes place in early June, likely alongside new versions of iPadOS, watchOS, tvOS and macOS.

It’ll then seed a beta version of the software to developers (and keen public beta testers) over the summer before being released in September, usually alongside the next-gen iPhone.

With that being said, we’re confident that we’ll get our first look at iOS 16 in June 2022, with a general release in September 2022 alongside the iPhone 14.

As with every iOS update ever, iOS 16 will be a free upgrade for supported iPhone users.

Which iPhones will support iOS 16?

While Android smartphones offer two or three years of OS upgrades - and even that’s a relatively new thing - Apple is very good at making its mobile operating system available to as many smartphones as possible.

Take the iPhone 6s for example; it was released in 2015, at the same time as Samsung’s Galaxy S6. While Apple included the iPhone 6s in its iOS 15 update, the Galaxy S6 didn’t get an upgrade to Android 8, let alone Android 12.

Of course, it’s far too early to know for sure which iPhones will be able to get the iOS 16 update. We imagine it’ll depend, in part, on how much power the operating system needs to run. 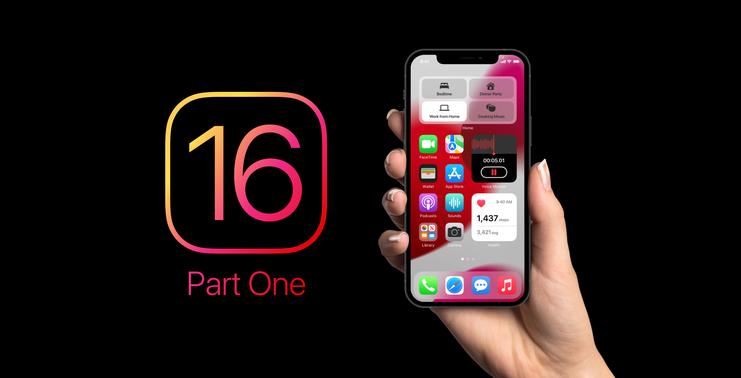 If it’s more demanding than iOS 15 then it’s possible that the iPhone 6s and 6s Plus could drop off the list, but even if that happens, there are plenty of iPhones that’ll almost certainly get the update.

Here’s a list of supported devices for iOS 15, and we imagine it’ll be very similar, if not identical, for iOS 16.

With the reveal of iOS 16 still quite some time away, it’s hard to say exactly what Apple has planned. But, as with most upcoming tech releases in 2021, there are already whispers and even leaks that give us a rough idea of what to expect.

We were treated (if you can call it that) to a whole range of new app icons in macOS Monterey, and sources suggest we could be about to see the same in iOS 16. While the Apple Maps and Weather app icons got a facelift in iOS 15, bigger changes are allegedly planned for iOS 16 - that’s according to iDropNews, anyway.

The publication doesn’t reveal its sources, but suggests that it has been told that Alan Dye, VP of Human Interface Design at Apple, has been working on the new icons with his team for around a year.

Though no specifics were provided, the site claims that the design trait of the updated icons will be “very similar” to the macOS Monterey icons. That could mean a modern take on the original iOS app icons, which had more depth and texture than the overhauled look introduced in iOS 7.

Of course, it’s worth taking this with the usual pinch of salt, as plans could very well change at this early point.

While Android users have been able to enjoy widgets since its inception, Apple was fairly late to the widget game, only rolling out the functionality in iOS 14 in 2020. Even then, the functionality was notably limited compared to its Android brethren, with no interactive elements available. Tapping a widget on an iPhone will instead take you to the app, which isn't always necessary.

Well, if the latest rumours are to be believed, that'll all change with iOS 16. The rumour comes from leaker @LeaksApplePro, who teased the introduction of interactive widgets on Twitter along with a leaked image showcasing the "big widgets" with codename InfoShack at Apple HQ.

🔴EXCLUSIVE: iOS 16.Be prepared for interactive widgets! Apple is now working on these “big widgets” internally named InfoShack.Will tell you more about them soon. pic.twitter.com/GZF9zYjOsw

Per the image, there seem to be interactive icons for music, stopwatch, flashlight, Apple TV and more.

The leaker says they'll provide an update soon, but noted that "there is a lot of work to do so there could be changes to this during the coming months" so it's far from a finalised feature at this stage.

The question is, is it legit? It's currently up for debate, with online commenters pointing out that the Apple TV icon is different to that in iOS 15. While that is true, let's not forget that Apple is also rumoured to be redesigning app icons in the next big update - that could also extend to Control Center/widget icons.

Whispers about Apple’s augmented reality plans have been circulating for years, and it looks like the company might be ready to announce something in late 2022 - if current rumours are to be believed, anyway.

But while some are banking on full-blown Apple AR Glasses, it sounds like it’ll be a high-end AR/VR headset, blending the real and augmented worlds into one. While details are short on what to expect in terms of content, rumours suggest you’ll use your iPhone to control various elements of the experience.

So, we expect to see some kind of AR/VR headset controls built into iOS 16 in a similar way to the Apple TV remote being accessible via the Control Centre.

It’s also possible that Apple will update ARKit, its API for AR app development, to include new features and functionality.

Meta-owned Oculus is rolling out mixed reality support to the Quest 2, allowing the headset to recognise objects in the real world and interact with them, and it’d be great for developers of iOS apps to offer something similar ahead of the release of the dedicated hardware.

Have you heard anything about iOS 16? Let us know on Twitter.