With the launch of iOS 15.2, Apple is adding a new "Parts and Service History" section to the Settings app that will let users see the service history of their iPhones and confirm that components used for repairs are genuine.

Apple will provide different information on components depending on ‌iPhone‌ version.

If a fix was done with genuine Apple parts and tools, repairs in this section will have a "Genuine Apple Part" listing next to the repaired component. 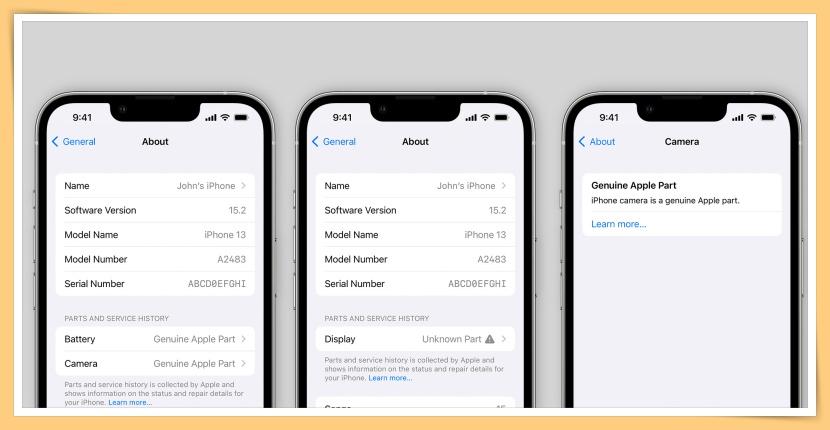 An "Unknown Part" message will be displayed if a part installation is incomplete, the part was replaced with a non-genuine component, the part was already used or installed in another ‌iPhone‌, or if the part is not functioning as expected. In prior versions of iOS, customers are only able to see if a replacement part is identified as an Unknown Part.

Apple says that the messages in the Service History section will not affect the ability to use the ‌iPhone‌, its battery, display, or camera. The information is collected and stored on device, with Apple using it for service needs, safety analysis, and to improve future products.

The addition of the "Parts and Service History" to the ‌iPhone‌ comes alongside a change that Apple is making to ‌iPhone 13‌ models. At release, it was discovered that replacing a broken display on an ‌iPhone 13‌ without specialized tools and components from Apple disables Face ID.

After backlash from the repair community, Apple said that it would introduce a software update that would allow for display repairs that do not affect Face ID. iOS 15.2 removes the specific pairing requirement that caused Face ID not to work when a display repair is performed by a repair shop without Apple-certified equipment.

In November, Apple announced plans for a new Self Service Repair program that will allow users to complete their own device repairs using instruction manuals and components provided by Apple. This will join the Apple Authorized Service Program and Apple's Independent Repair Provider Program, which provides Apple parts and tools to independent repair shops that are not AASPs.