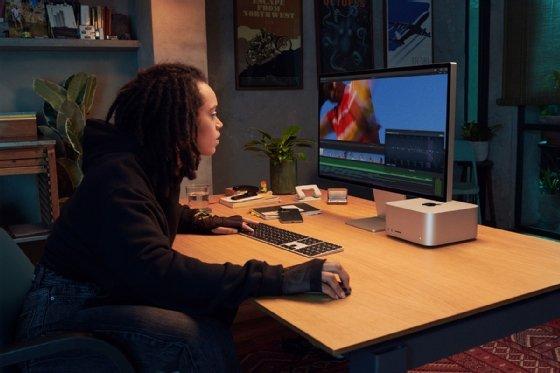 Apple addressed the needs of graphic designers and video editors with the latest iteration of its M1 chip. The Arm-based system on a chip will power the company's workstation for creative professionals.

The M1 Ultra, introduced this week at Apple's first product event of the year, combines two Max chips through a process the company calls Ultra Fusion. The new processor will appear first in Apple's Mac Studio.

The Mac Studio is a $4,000 computer for people who need a lot of processing power. The Studio, available on March 18, will replace Apple's last remaining Intel-based PC, the Mac Pro.

The M1 Ultra will significantly increase rendering speeds and make it easier to work with large 3D models, edit videos or perform other intensive tasks while keeping the sound to a minimum and the temperature low.

"Creative professionals need it," Gartner analyst Mikako Kitagawa said. On similar Intel-based machines, "the rendering time is extremely long, it's noisy, and it gets hot."

The M1 Ultra has 114 billion transistors and a maximum of 128 GB of unified memory. The chip has a 20-core CPU, a 64-core GPU and a 32-core neural processor that Apple said runs up to 22 trillion operations per second.

The M1 Ultra is the successor to Apple's M1, M1 Pro and M1 Max chips. After their release in 2020, the M1 series spurred Apple PC sales with their high performance-to-energy-consumption ratios. An M1 Max model of the Mac Studio will be available for $2,000.

Apple fits the power of the M1 Ultra in a workstation with a 7.7-inch square footprint and a height of 3.7 inches.

"The size of the workstation-level desktop is remarkable," Kitagawa said.

The Mac Studio has four Thunderbolt 4 ports, a 10 GB Ethernet port, two USB-A ports, an HDMI port and an audio jack on its back panel. The front panel has another two Thunderbolt 4 ports -- or USB-C ports if it's an M1 Max model -- and an SD card slot.

The 27-inch monitor comes with a 12-megapixel camera, a three-microphone array, four subwoofer speakers and two tweeter speakers. Also, it has three USB-C ports and one Thunderbolt 4 port. The Studio Display costs $1,600.

In addition to the M1 Ultra chip, the Mac Studio workstation and the Studio Display, Apple released new models of its lower-cost iPhone SE for $430 and an iPad Air for $600.

Maxim Tamarov is a news writer covering mobile and end-user computing. He previously wrote for The Daily News in Jacksonville, N.C., and the Sun Transcript in Winthrop, Mass. He can be found on Twitter at @MaximTamarov.