Which Email Has Most Free Storage – Gmail or Yahoo Mail?

Gmail and Yahoo Mail are two of the biggest email providers on the planet. But which of these two titans of email gives you the most storage for free?

Gmail and Yahoo Mail are both massively popular email providers, taking care of BILLIONS of email addresses and, likely, trillions of sent and received emails every single day. Both are used extensively by millions of users on desktops and via apps on phones. But which email provider out of these two offers the most free storage?

I’ll admit, prior to writing this post, I was firmly against Yahoo – for a variety of reasons. I also really like all the added extras you get with a Gmail account; things like access to Google Drive and whatnot. But what I didn’t realize was just how stingy Google is with its storage allowances on email.

Which Email Offers Most Free Storage – Gmail or Yahoo Mail?

If all you’re concerned about is free storage on your email account, Yahoo Mail is the clear victor by a considerable margin. With a free Yahoo Mail account, you’ll get 1TB of free storage. With Gmail, you’re limited to just 15GB. And if you go over 15GB, you’ll be forced to buy additional storage from Google.

Whichever way you slice it, 1TB vs. 15GB is pretty significant and I’ll be the first to admit that I had no idea Yahoo offered this much free email storage. I knew Google had storage limits on Google Drive, which is understandable, but I didn’t realize these limits applied to email inside Gmail. It’s enough to really make you think about the amount of useless email you get! 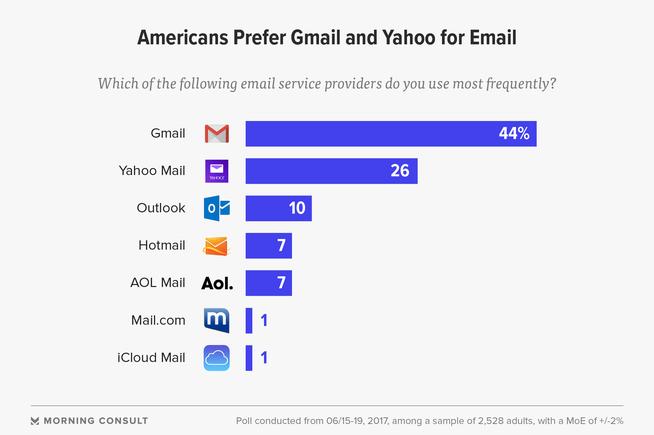 Gmail and Yahoo Mail aren’t just about email. Yahoo has gone to great lengths to make its Yahoo Mail app a sort of centralized hub for all your internet activity. Inside Yahoo Mail, you can quickly access things like a calendar, a notepad, and a number of other Yahoo apps like News, Finance, Sports, Fantasy, Politics, and Celebrity news.

With Gmail, you have a chat (IM) functionality, so you can connect and quickly IM with your contacts, as well as full access to Google’s productivity suite, Google Drive. Inside Google Drive, you can basically create any kind of document – from spreadsheets to presentations and articles and blog posts. It’s a brilliant suite of tools.

If you use an Android phone, you will automatically have a Gmail account – you have to have one to use an Android phone. This is partly the reason why Gmail is so popular. Google basically forced billions of people to adopt Gmail in order to use its Android operating system which is currently the #1 most used mobile OS on the planet.

Which is Most Secure?

Yahoo doesn’t have a particularly good record with security. It experienced one of the biggest PR disasters in the history of email back in 2014 when it exposed over 500 million accounts to hackers. This was huge news at the time and likely saw plenty of users ditch Yahoo and move over to Gmail or Microsoft’s Outlook.

And then, again, in 2016, over 200 million Yahoo Mail accounts, complete with passwords and user names were discovered on the Dark Web. Neither of these incidents did Yahoo any favors. Email is a fiercely private thing and the idea of having your email account exposed to potential hackers or on the dark web is not very nice, or comforting. Let alone the fact that it happened twice in as many years.

With Gmail, things are a lot better from a security perspective. Gmail has not suffered any embarrassing data breaches, save for 2018’s Google API hack, but this didn’t have any effect on Google’s Gmail service or the accounts that use it. In this respect, it would appear that Gmail, at least from a historical perspective, is the more secure of the two email providers. Gmail also has a bunch of additional security features that can be easily activated as well.

Is Gmail Better Than Yahoo Mail Then?

In terms of email, Gmail and Yahoo Mail both have their positives. They both do email very well, for instance, and one could argue that Yahoo actually has better organizational controls inside it. But when it comes to things like productivity apps and general security, Gmail is clearly the better option – although it does lag behind with respect to the amount of free storage you get for email.

I have used both Yahoo and Gmail and I now pretty much use Gmail and Google’s enterprise version, Workspace, more or less exclusively. The main reason for this is Google Drive – I just it to organize and run my businesses. The second reason is that I trust Google more than Yahoo when it comes to protecting my data. Yahoo has much to do in this context to prove it is once again trustworthy.

Of course, you may have differing opinions. Plenty of people do not like Google one bit, or how it handles and processes data. But in this context, it is very much a case of better the devil you know. And after Yahoo’s several security breaches in the past decade, I think it is fairly safe to say that your email account will be safer if it is handled by Google inside Gmail.

Richard Goodwin has been working as a tech journalist for over 10 years. He is the editor and owner of KnowYourMobile.