What is iCloud+ and why do I care?

Apple announced iCloud+ when it revealed iOS 15, macOS 12 Monterey, watchOS 8, tvOS 15, and iPadOS 15, during WWDC21. So as you may have guessed from the famous plus sign (+) that follows certain services, it’s a paid subscription. So how different is it than the previous iCloud Storage subscription? Is it more expensive? Why should you care about it?

Apple has been offering users 5GB of free iCloud storage for a long time. See it as a free trial — it’s enough to get you completely hooked into the Apple ecosystem, but not enough to depend on it down the road. So once you get a taste and realize how sweet it is, you feel urged to upgrade to continue using it when you run out of space. But how would it get you hooked?

iCloud storage isn’t merely for storing documents and files — it goes beyond that. It lets you store photos, videos, notes, reminders, messages, email, health data, device backups, contacts….the list goes on. Now it’s safe to assume we all know Google offers 15GB for free, instead of 5GB. And Google has an alternative for almost each of the listed services I’ve just mentioned. So why would you pay Apple when you could use Google’s tripled capacity for free? The answer is pretty simple.

While you could store your media, files, contacts, and more in Google Drive, Apple offers the instant and seamless syncing between other Apple devices. Many users, including me, are willing to pay Apple to expand the 5GB capacity, even if our data would fit in Google’s 15GB quota. We want our data to stay in sync even when the respective apps are completely closed. Apple Photos automatically backs up your new shots without having to open the Photos app. After that, it also automatically downloads them to your other devices, without necessarily needing to open the Photos apps on the other devices.

In Google Photos’ case, you’d have to enter the app every time you take a new shot and wait for it to back them up. It’s not automatically done in the background. Now this may seem like a silly reason to pay money for, but trust me, it adds up. It’s not only the Photos app we’re dealing with here — it’s almost all of your useful and important data. Typed an article idea in the iOS Notes app when you were half asleep at 2:35AM? You’ll find it waiting for you in the macOS Notes app when you wake up. Once you’re done with typing the full article on your MacBook, you’ll find the updated version in your iPadOS Notes app to edit it while commuting on the metro. It’s convenience you’re paying for, not just the extra storage.

One could argue this can all be done through Google apps. But again, the process isn’t as quick, seamless, and power-efficient (considering Apple has optimized iCloud sync for its devices). Those who have all of their data and devices linked to one Apple ID know how magical the experience is. A lot of tasks you’d have to consciously do yourself get done in the background without you thinking or worrying about anything. 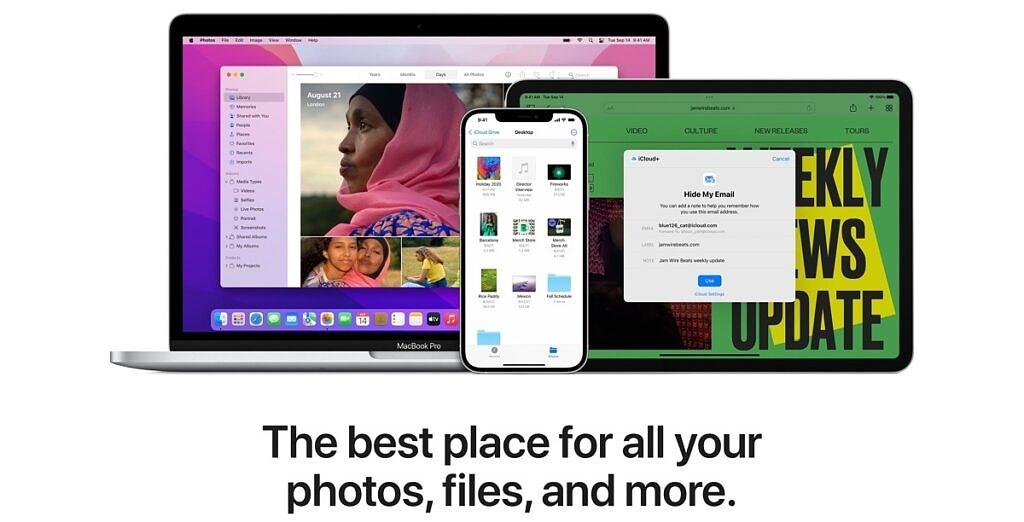 As we previously mentioned, iCloud+ was announced during WWDC21. It’s a paid subscription feature from Apple. Oh no! More services to pay for?! The good news is it’s not actually a new subscription service per se. It’s more of an upgrade to the existing paid iCloud storage service — for the same price. So you get the new privacy-focused features, in addition to the regular storage expansion, for the same $0.99, $2.99, or $9.99.

Storage in iCloud+ remains the same as before. The offered tiers are still 50GB, 200GB, and 2TB. The maximum amount of iCloud storage you can have per one Apple ID is 4TB. To achieve that, you would need to subscribe to the Apple One Premier bundle, which includes 2TB of iCloud storage. Then you would have to separately buy 2TB by subscribing to iCloud+. You would end up with 4TB of iCloud storage in total.

Private Relay is a VPN-of-sorts service from Apple. The company describes the feature as follows:

iCloud Private Relay lets you browse with Safari on different networks in an even more secure and private way — whether that’s at home, a hotel, or a cafe. It’s designed so that websites, network providers, and even Apple can’t use your IP address, location, and browsing activity to create a detailed profile about you.

This feature allows you to either maintain your IP address location or change it to a different country’s so tracking you online is even harder. However, it’s worth noting this feature only works inside Safari, not on a system level or in other apps.

Known as Private Delay on some internet corners, this feature is still in beta and has some performance issues. As the given name suggests, some users have reported slow speeds when loading websites with the feature toggled on. It may take a while until Apple perfects it, but in the meantime it’s still a neat feature that contributes to a user’s peace of mind.

Unfortunately, Private Relay isn’t available in all countries and regions, and Apple doesn’t list where it’s supported. When I tried toggling it in Turkey, I got the following notification and banner in the Settings app:

Ever wish you could create online accounts without giving your actual email address to the respective websites? Wish no more, for the solution is finally here!

Hide My Email allows you to use random @iCloud email addresses that link back to your original Apple ID. So instead of inserting [original]@iCloud.com, you put [random]@iCloud.com in the email field when signing up. Emails sent to [random] by companies, such as verification and security alert emails, will arrive to your [original] inbox. This way you can receive all of the important news regarding your online account, without sharing your [original] address. And you can revoke the [random] address at any time if you want to stop receiving emails in your [original] inbox from a certain company.

If you use HomeKit-enabled cameras, this one’s for you. Apple describes HomeKit Secure Video as follows:

Connect your cameras with HomeKit Secure Video to record, analyze, and view your home security footage from anywhere. Footage is stored in an end-to-end encrypted format that only you, and the people you choose, can monitor. And none of that recorded video counts toward your iCloud storage, so you don’t have to give up space for the photos, files, backups, and other things you need most.

With this feature, you get to store footage from your smart security camera that does not count towards your iCloud storage quota. On the $0.99, $2.99, and $9.99 plans you gets to add one, five, and unlimited security cameras respectively.

iCloud+ makes paying for extra storage more tempting. Apart from the instant sync across all Apple devices, users now get extra privacy features for subscribing to this service, whether they’re on iPhone, iPad, or Mac. You can buy it individually, through an Apple One bundle, or both (for extra storage). Apple One offers three tiers, and each includes an iCloud+ tier, depending on the respective price, in addition to other Apple premium services.

What do you think of the new iCloud+ features? Are they notable enough to make you switch from a different online storage provider? Let us know in the comments section below.