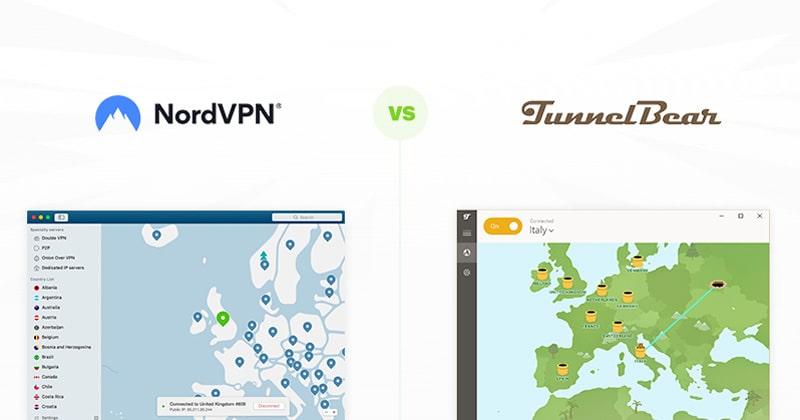 NordVPN vs. TunnelBear: Which is the better VPN in 2022?

Knowing the best VPN for your needs is an important step when signing up for a new service to keep your data protected. Both NordVPN and TunnelBear are major names in the VPN field but there are some significant differences between the two. While both are worth considering, different users will find different advantages depending on what they need from a VPN. It’s important to know exactly what each service brings to the VPN world so you can see what’s the best value for you.

If you’re not sure where to begin, don’t worry. Read on and we’ll guide you through everything. Appreciating that you may not know where to begin, we’ve compared NordVPN and TunnelBear so you know exactly where each service has its strengths and weaknesses. We take a look at what devices both services support, along with features, how fast they are, and how much they’ll set you back to use. After this, you’ll know exactly which VPN is best for you.

When signing up for a VPN, you want it to support every device in your home, right? We’ll cut to the chase — NordVPN has the edge here. NordVPN has an app or extension for pretty much everything imaginable. That includes Windows, MacOS, Linux, and Chromebook, and it’s pretty smart elsewhere too.

It also includes browser extensions including a Chrome VPN along with Firefox and Edge support. There are apps for Android and iOS too. Best of all, you can even download NordVPN apps for Android TV, Amazon Fire TV Stick, Raspberry Pi, Chromecast, and Kindle Fire. The only thing NordVPN really misses out on is a dedicated Apple TV VPN app but it takes moments to set up through changing some settings so it’s no great loss.

In contrast, TunnelBear is a bit more limited. It has apps for iOS and Android, along with Mac and Windows. There are extensions for Chrome and Firefox too. However, for anything else, you’ll need to change settings manually or do so via the router so your whole network is covered by the VPN. Is this a big issue? Not necessarily if you know how to tweak settings for yourself and figure out workarounds but it’s not ideal if you’re a novice that simply wants to install an app and let the service do the rest for you. In particular, more support for streaming devices would have been really useful for TunnelBear users.

When it comes to how many devices and users are supported, there’s not a huge amount of difference between NordVPN and TunnelBear. NordVPN supports up to six simultaneous connections while TunnelBear offers up to five people connected at once. In reality, none of this hugely matters providing you know how to change settings on your router. By doing so, you can have an unlimited number of devices connected as the router is considered to be just one connection.

Both NordVPN and TunnelBear offer the key features you would expect from a VPN. That means they focus on keeping your browsing activities private. You won’t have to worry about either service keeping logs of your time online, plus you get the benefit of encryption that ensures your data stays safely hidden away. However, both services do things a little differently.

NordVPN is based in Panama so jurisdiction-wise, this is a true no-logs VPN service. However, TunnelBear is owned by McAfee and is based in the U.S., potentially meaning authorities could request access to your information although — again — no logs should be being kept. For most users, either service is suitably secure but some may feel more comfortable with NordVPN’s location.

The big change for many people is that NordVPN simply offers so much more. Its killer feature is its split tunneling support. That means that users can stream and share via their VPN connection while browsing online locally, giving them the benefit of full protection and being well-identified for things they may need. Its flexibility is fantastic. Alongside that, it also has a kill switch feature that disables your connection if the VPN drops along with protected DNS queries, double VPN protection, and IP masking. And, of course, it’s ideal for using as a VPN for streaming if you’re looking for a great Netflix VPN for checking out other versions around the world.

In contrast, TunnelBear is a little more limited. It has all the basics like the ability to keep your data secure from potential hackers. It also prevents IP-based tracking so ad services can’t monitor your behavior across websites, plus it blocks your connection if the VPN suddenly drops. It offers up the ability to access global content and bypass local censorship but it generally has less success when getting around Netflix and other streaming services’ georestrictions. On the plus side, it does promise to be the only VPN to publish regular, independent security audits, which could provide some peace of mind for concerned users.

Speed-wise, predictably, NordVPN has the advantage again. In part, that’s because it has so many options. Right now, it has 5,243 servers across 60 countries. If you happen to find one sluggish, you can easily switch over to another in the same country without missing out. It’s very easy to switch servers too so you can truly feel like you’re exploring the world at the tap of a button.

In contrast, TunnelBear has about 2,000 servers across 49 countries. That’s still very good and should suit many users, but it’s not as impressive as NordVPN’s number. In terms of flexibility, NordVPN is simply better.

When it comes to pure speed, NordVPN is generally regarded as superior too. Generally, VPNs can slow your connection a little as it involves going through another server but that difference is less noticeable when using NordVPN. Many reports explain that NordVPN only causes a small dip in speeds while TunnelBear is far more significant. When streaming or playing games, you don’t want to suffer buffering so NordVPN is far better here.

The figure can change depending on the protocol you use. For instance, the OpenVPN TCP is a particularly security-orientated protocol so speeds are pretty slow regardless of what you use but NordVPN still tends to be less slow here. For regular protocols, the difference is much more noticeable. Basically, you won’t get the most from your connection by sticking with TunnelBear.

By this stage, you may be wondering why even bother with TunnelBear when NordVPN is so good. Simply put, pricing. If you’re looking for a VPN free trial, neither will delight you, although NordVPN does offer a 30-day money-back guarantee if you’re not satisfied. Elsewhere, there are some fantastic VPN deals from both services.

Right now, you can sign up for NordVPN for just $99 for the first 2 years. That works out at just $4.13 per month, representing a savings of 65% over the two years. Alternatively, a one-year plan costs just $59 for the first year. Skip the one-month plan for $12. It’s not great value when you can get a whole year for less than $50 more.

Alternatively, TunnelBear does not need a VPN free trial because — potentially — it’s free. Its free plan is limited. You get just 500MB of secure browsing each month on just one device, but that’s ideal for trying it out. It could also be a good option if you simply need a VPN for a day or two, or for one specific scenario. If you want unlimited browsing and the full wealth of five connected devices, you’ll need to pay. It costs either $10 per month, $60 for a year, or a mere $120 for 3 years.That’s $20 more for an extra year compared to NordVPN’s two-year plan so, on the surface, it looks like very tempting value. However, features are more limited at TunnelBear so it really depends on what you need a VPN for most.

In both cases, prices change regularly with NordVPN particularly keen to celebrate pretty much any holiday with a sale. Also, bear in mind that both are always best value if you commit to a longer subscription period. It’s not a good idea to subscribe for just one month as it works out as a lot more expensive going this route. If you only need a VPN for a brief period of time, you may even be best off sticking with TunnelBear’s free plan, providing you’re not looking to download anything.

NordVPN and TunnelBear serve very different audiences. As you’ve seen, NordVPN offers a lot more features than TunnelBear. Advanced users will really appreciate its split tunneling feature. It’s useful to be able to browse online locally on one connection while having your downloads or streaming running separately on a protected VPN-based server. Double VPN protection is also very practical when you want to be extra secure with your browsing time, especially when backed up with NordVPN blocking your connection if your VPN suddenly drops.

In contrast, TunnelBear is far more limited. It does the basics. It protects your browsing activities from snooping eyes and you have decent protection, but it’s not as high-end as NordVPN. Streaming is often a little trickier with TunnelBear as the likes of Netflix can spot it. Also, there’s no split tunneling or other advanced features. Perhaps worst of all, speeds can be pretty slow when browsing or downloading.

However, TunnelBear is much easier to use. While NordVPN is far from tricky, TunnelBear offers such a cute and friendly user interface that even the most inexperienced of users can figure it out. It’s cheaper too, depending on how long you commit, so for casual users, it should do the job well.

Like with many purchasing decisions, only you really know what you need most from a VPN. NordVPN is the best in terms of features and speeds, but if simplicity is important for your household (such as if you want the whole family to be able to use it easily) then TunnelBear certainly has plenty of appeal. For short-term use, you can’t go wrong with TunnelBear either. Just don’t count on it being as high quality as NordVPN. It serves a purpose but you haven’t got the best for your money by sticking with it.