After being launched in China in December, the Xiaomi 12 has finally been ‘unveiled’ for an international audience - we use the scare quotes because Xiaomi opts to relaunch its phones when it makes them global, but it’s exactly the same device that’s been available to Chinese buyers for months.

We’d consider the Xiaomi 12 an interesting departure for the brand, except Xiaomi shakes up the structure of its flagship family nearly every year, so we’ve learned not to take anything for granted. However, in 2022 the Xiaomi 12 clearly seems to be taking on the Galaxy S22 series.

That’s because the Xiaomi 12 is surprisingly small - in fact, it’s almost exactly the same size as the S22, with a Xiaomi 12 Pro sitting above it at a similar size to the S22 Plus. Xiaomi typically sticks to large mobiles, so this downsizing is a key change.

We’re fond of this smaller size, as it makes the Xiaomi 12 easy to hold and use in one hand, without you needing to turn into Stretch Armstrong to reach side buttons or the extremes of the display.

However, the phone has a few weak links too - the cameras are good but they struggle in some ways to hit flagship quality, and the screen isn’t as high-res as on some rivals.

We’ve tested the Xiaomi 12 for a few days - that’s not enough time to write a full and detailed review, but we’ve collected our initial impressions here.

We start with the usual refrain for Xiaomi phones: these devices don’t go on sale in the US, so don’t expect to be able to buy it there. If you live in the UK and Australia, you’re fine.

We do actually have a US price of $749 (roughly £750, AU$1,030), but that’s likely a guide figure since the US Dollar is a recognizable currency around the world. We’ll wait until we hear the official regional prices before we make a decisive verdict on the cost.

When will this phone go on sale? Well, we haven’t been told, but expect it to land in the coming weeks

We’ve got to say that we really like the Xiaomi 12’s appearance - the colors are soft and subtle, with understated shades (there’s blue, black, green or pink, though we’re not sure if all versions will launch in all markets) and an unassuming camera bump. 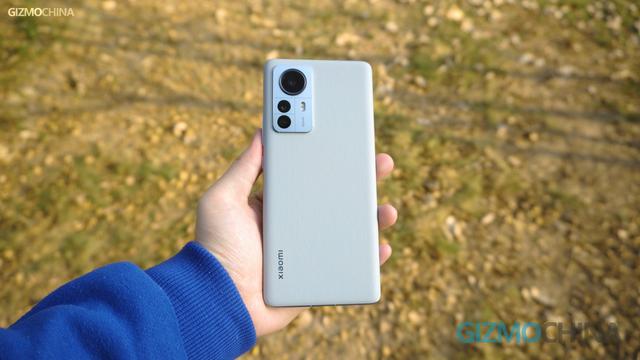 As stated, this is a surprisingly small device that’s easy to hold and use in just one hand. That’s a comment we never expected to make about a flagship Xiaomi phone.

The side buttons on the phone are all super easy to reach as a result and it wasn’t much of a stretch to tap the far extremes of the display. This is a great phone for people with smaller hands, or who want a one-handed device.

The display clocks in at 6.28 inches, a relatively small size compared to contemporary flagships. It’s an OLED panel with an FHD+ resolution and 120Hz display. Those specs are worse than on the Mi 11 or the 12 Pro, but are on par with the vast majority of modern Android phones in the mid-range or top-end segment.

Those specs are basically the same as the Galaxy S22, so you’re not getting a worse viewing experience here.

Xiaomi is one of a handful of companies with some AI display features under the hood, so you can toggle on things like Motion Estimation, Motion Compensation (MEMC - it artificially upscales the framerate of viewed video) or Super Resolution (does the same but for resolution instead of framerate). Honestly, you’ll need an astute eye to notice these differences, but they might be worth it for prolific streamers.

Xiaomi has come off its 108MP high horse with this 12 series, which is its first flagship series since the Mi 9 to not feature a super-high-res camera. Instead, the main snapper here is 50MP.

Resolution isn’t everything for photography, which is likely why Xiaomi’s 108MP-to-50MP descent could really be described as an upgrade - the sensor size is bigger, meaning pictures are brighter.

The other two cameras are the same as on the Mi 11 though - there’s a 13MP ultrawide unit for shots with a wide field of vision, and a 5MP telemacro snapper for vibrant close-up shots. We were impressed by the 2021 flagship’s camera performance, especially in the telemacro camera, and everything seems the same here.

The fact that there’s nothing new here is disappointing. For the past few years, Xiaomi has introduced cool new modes and features every time it put out a new smartphone, but we couldn’t see anything like that.

We did test a pre-release Xiaomi 12 unit though, so there’s a very real possibility that a software upgrade will bring new features. We’ll have to see.

The battery is 4,500mAh and you can power it up with 67W wired or 50W wireless charging. Both options seem nice and quick for flagship phones, especially the cable-free option, as 50W is one of the fastest wireless speeds we’ve seen in any phone.

We’re hoping for good battery life with the Xiaomi 12 - 4,500mAh is pretty big for a device with a small screen. However, the various display upscaling features, refresh rate, 5G connectivity and powerful processor might offset that.

Like most top-end phones in 2022, the Xiaomi 12 comes with the Snapdragon 8 Gen 1 chipset. This provides loads of processing power making it great for games and other power-hungry apps.

It’s also prone to heating up the phone easily though. The phone was constantly warm through our initial few hours of use and even when it was fully set up, it got toasty when playing Call of Duty: Mobile.

The handset comes in three configurations: the lowest has 8GB RAM and 128GB storage, and you can also get 8GB/256GB or 12GB/256GB. We tested the middling option.

The software is Android 12 with Xiaomi’s MIUI laid over the top. As with all forks of stock Android, the key difference here is the appearance, which you can see on images of the phone.

One thing to note is that while most Android UIs let you swipe down from the top to see the quick settings and notifications list, MIUI copies iOS in separating them. Swipe down on the left side of the screen and you’ll get your notifications, do the same but on the right and you’ll have the quick settings. This isn’t better or worse than the way other forks look, but some might prefer it and some might not.

We’ve previously found MIUI to have loads of bloatware, but while there were a few annoying pre-installed apps here, there wasn’t an overwhelming amount - not compared to what we’ve seen from some other handsets recently.

We thought we’d like the Xiaomi 12 with its nice compact size, but after testing it, the Xiaomi 12 Pro is a more tempting alternative. It has a better camera array, a higher-resolution display, and much faster charging.

The price will be the real deciding factor between the two, and we’ll need to wait for that to make a full decision on how good the Xiaomi 12 is. This handset needs to have a mid-range price to really compete in the way Xiaomi is clearly trying to do.

It’s a fine phone, with fast charging, a powerful processor and attractive design, but in many other aspects, like cameras, display and software, it’s very much ‘good’ and not ‘great’.