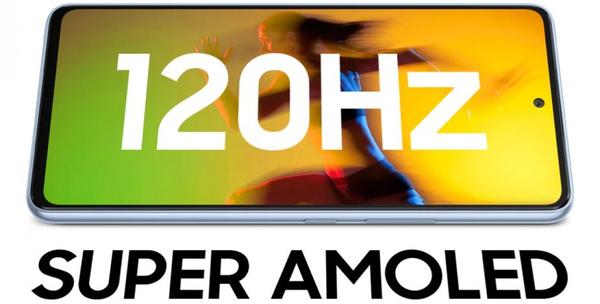 Almost a year after Samsung revealed the Galaxy A52 (and the rest of the 2021 Galaxy A family), the company is back with even more phones. While the foldables and the Galaxy S22 line might grab the headlines and raise the bar for specs, the Galaxy A phones have been a commercial success, combining decent specifications with large screens, complicated camera arrays and Samsung’s premium aesthetic.

The new Galaxy A53 and the A33 don’t diverge from this strategy – it is working, after all – but instead pairs 5G connectivity and Samsung’s more powerful 5nm Exynos chips. They also look remarkably similar to each other and the extended Samsung Galaxy phone family.

I’ll focus on the A53 5G, which is coming to the US on April 1st, priced at $450 — $50 cheaper than the A52 from last year. It has a 6.5-inch AMOLED display that’s capable of 120Hz refresh rates, matching last year’s model. Samsung says it’s capable of adaptive refresh rates, but couldn’t specify the range as of this writing. Still, it’s rare to see any degree of adaptive refresh rates in phones at this price. Smooth scrolling is usually the hallmark of an expensive device, so I was pleasantly surprised in a recent demo session to find that interacting with the A53 felt similar to using more expensive phones like the S22. There are some signs that it’s not quite as premium as Samsung’s top phones, with a notable bezel around the display.

Samsung puts a lot of emphasis on its camera innovations, and the A series has benefited from that. In 2022, that means another quad-camera system – take that, iPhone SE. The main 64-megapixel sensor has optical image stabilization and an f/1.8 aperture, which works alongside a 12MP fixed-focus ultra-wide camera, and two 5MP sensors: one for depth detection and another for macro shooting. 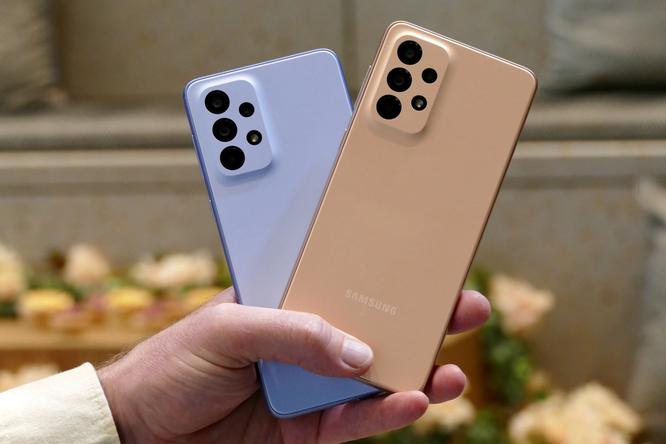 Samsung’s briefing rooms aren’t the best place for an impromptu photoshoot, but with a high-res primary camera, I was pleasantly surprised at the detail I captured from some of the set dressing. When lighting was consistent, I was able to take some sharp shots of other attendees, with an array of filters to add while using the camera app. (These filters are also now available across the A53’s other cameras.)

The camera system benefits from the new 5nm Exynos 1280 Octa-core processor inside the phone, Samsung says the power of this new chip made its AI-augmented night mode shooting possible. The A53 can draw together 12 frames and create a more stable (hopefully more detailed) single image. The A53 can also adjust video capture frame rates to improve shot quality. You’ll also get some of the most recent Samsung photo editing features, like Object Eraser and Photo Remaster to help salvage more of your shots.

Samsung says improvements from the new processor should be felt elsewhere, too, claiming a 43 percent increase in GPU performance and a 31 percent boost in AI processes. (Like the aforementioned night mode.)

Yes, the design is very similar to last year’s A52, but with both 5g and a more powerful chip, this could ensure that this device is more future-proof than its predecessor. Samsung promises four years of software updates, and both new A-series phones will come with the latest version of its One UI – which is currently making its way to the rest of the Galaxy phone range.

Samsung’s approach to affordable mid-range phones stands in contrast to how Apple reintroduced the iPhone SE earlier this month. And yet, the phones will inevitably face comparisons. Samsung has gone to great lengths to ensure the A53 fits in alongside the S22 and the S22 Ultra both design-wise and when it comes to cameras. Meanwhile, Apple’s iPhone SE keeps a classic design but pairs it with a powerful cutting-edge chip found in its most-expensive devices. Preferences on iOS versus Android notwithstanding, it could come down to whether you want a new phone with a big screen, or one that easily fits into your pocket.

The Galaxy A53 5G will be available for preorder on April 1st across T-Mobile, Verizon and AT&T, with the phone launching on April 8th. Besides carriers, you’ll get the choice of white and black color options, as well as new powder blue and peach hues, if you’re looking for something a little different.