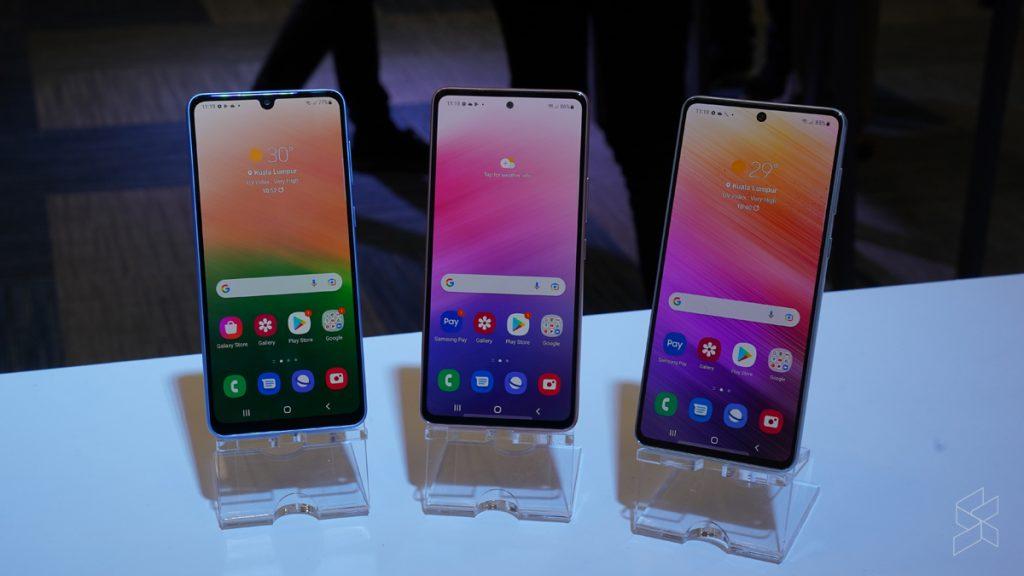 Samsung has just unveiled their latest midrange smartphones in their Galaxy A lineup. Consisting of three new models, the Galaxy A73, Galaxy A53 and Galaxy A33, they all feature Samsung’s new ‘Ambient Edge’ design philosophy and offer some pretty significant looking upgrades over the last generation of Galaxy A devices.

So far, there’s no mention just yet on when these three new smartphones will be making their way to Malaysia as Samsung Malaysia has not shared any details about it just yet. However, they did share how much they’ll cost:

This makes the Galaxy A series quite a bit more expensive than last year’s Galaxy A lineup. The Galaxy A72 LTE from this time last year for example cost RM1,899, while the Galaxy A52 LTE cost RM1,499—the same as the new Galaxy A33. Meanwhile the Galaxy A32 LTE from last year cost RM1,099. After that, Samsung introduced the Galaxy A52 5G at RM1,899, before releasing a new refreshed Galaxy A52s 5G for also RM1,899. This new lineup may seem much pricier in comparison, but we are seeing a fair number of upgrades over the last generation of devices, though it’s yet to be seen if that’ll make it worth it.

Starting with the biggest of the bunch, the Galaxy A73 has a fairly large 6.7-inch, FHD+ Super AMOLED display with their usual Infinity-O punch hole cut out. It’s also capable of up to a 120Hz refresh rate, while the front gets a layer of Corning Gorilla Glass 5 too for scratch resistance, an upgrade over the last generation’s Gorilla Glass 3. 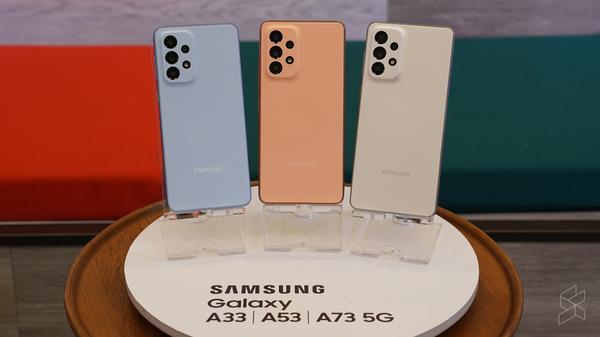 Under the hood, you’ll find a Qualcomm Snapdragon 778G system-on-chip mated to up to 8GB of RAM and up to 256GB of storage. It’s a little of a weird choice when you realise it’s the same chip powering the Galaxy A52s, but it is still a very capable upper midrange processor. You’ll also be able to add up to 1TB of external storage via a microSD card. It will come with Android 12 via One UI 4.1 out of the box, and Samsung will be giving it three major OS upgrades and up to four years of security patches, and the same will apply for all of these new Galaxy A devices.

As for its cameras, it gets a quad camera setup on the rear of the device, with a 108MP main camera that also features optical image stabilisation. This gets flanked by a 12MP ultrawide camera, a 5MP macro lens and a 5MP bokeh sensor. As for selfies, the Galaxy A73 has a 32MP front facing camera housed in the punch hole cut out on the display.

Keeping the lights on is a 5,000mAh battery with 25W fast charging. You’ll need to get your own powerbrick though, as perhaps part of making the Galaxy A series feel like a flagship also includes removing a bundled charging brick. The Galaxy A73 has stereo speakers too, but sadly loses the 3.5mm audio jack. It does have an under display fingerprint sensor and IP67 dust and water resistance rating though, along with support for 5G, NFC, WiFi 6 and Bluetooth 5.0. The Galaxy A73 will come in five colour ways, which are black, white, blue, peach and mint.

As for the middle child of the Galaxy A series, we have the Galaxy A53 with its 6.5-inch, FHD+ Super AMOLED display, again with an Infinity-O punch hole cut out. Just like the Galaxy A73, it has up to a 120Hz refresh rate too as well as a layer of Corning Gorilla Glass 5 over it.

Incidentally, the launch of the Galaxy A series also brings with it a new member of the Exynos family of system-on-chips, the Exynos 1280. It’s an upper midrange chip packing two Cortex-A78 performance cores and six Cortex-A55 efficiency cores. This gets paired with up to 8GB of RAM and up to 256GB of storage, with expandable storage also an option. Again, you’ll find One UI 4.1 out of the box running Android 12.

In the camera department, while it has a quad camera setup too, the main camera this time comes in at a lower but still respectable 64MP, also with optical image stabilisation. There’s a 12MP ultrawide camera as well as a 5MP macro lens and a 5MP bokeh sensor. Up front, just like the Galaxy A73 the Galaxy A53 has a 32MP front facing camera for selfies.

Elsewhere, it’s pretty similar to the Galaxy A73, with a 5,000mAh battery capable of 25W charging, but again no charger in the box. The Galaxy A53 also has an under display fingerprint sensor, IP67 dust and water resistance rating, with support for 5G, NFC, WiFi 5 and Bluetooth 5.1. There’s stereo speakers as well but no 3.5mm audio jack. It comes in black, white, blue, peach and mint.

Lastly, we have the Galaxy A33, the smallest of the lineup though you won’t realise it at first as its dimensions are pretty similar to the Galaxy A53. The screen is a 6.4-inch, FHD+ Super AMOLED display but has a rather old school notch instead. There’s also a pretty chunky chin at the bottom of the phone. You won’t get a 120Hz refresh rate here either, though it goes halfway there by topping out with a 90Hz refresh rate. And though it may sit at the bottom of the product stack, it still gets Corning Gorilla Glass 5 over the screen.

Under the hood, you’ll find the same Exynos 1280 system-on-chip powering the device, with up to 8GB of RAM and up to 128GB of storage, and you can add on expandable storage too. It comes with One UI 4.1 out of the box just like its siblings in the lineup.

It’s cameras though are arguably the weakest of the bunch, as despite having a quad camera setup its main camera this time is just a 48MP shooter, though it has optical image stabilisation too. This gets flanked by an 8MP ultra wide camera, a 5MP macro lens and a 2MP bokeh sensor. It also gets a weaker selfie camera, packing a 13MP front camera in the notch.

The Galaxy A33 will have a 5,000mAh battery, once more with 25W charging and no charger bundled in the box. There’s an under display fingerprint scanner, an IP67 rating along with 5G, NFC, WiFI 5 and Bluetooth 5.1 connectivity. You’ll find no 3.5mm audio jack again but at least it does have stereo speakers. The Galaxy A33 will have the same black, white, blue, peach and mint colourways too.