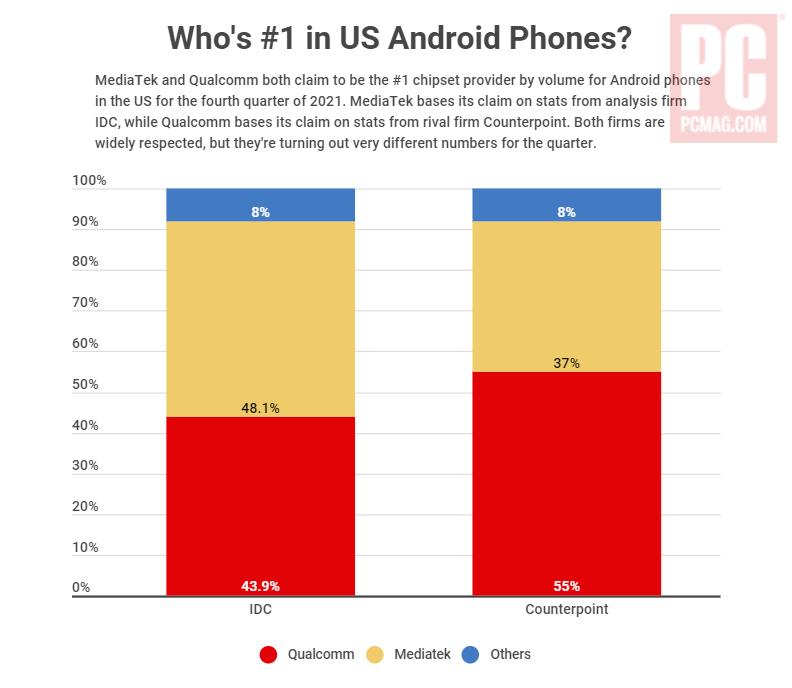 MediaTek and Qualcomm both say they’re No.1 for Android chips in the US [Updated] Guides

Qualcomm’s Snapdragon series is usually the first thought when it comes to what powers an Android phone in the US, but it seems times are changing. According to a new report, MediaTek processors are now the most common chips found in Android phones sold in the US — Qualcomm disagrees.

Update 3/2: In a follow-up article, PCMag provides new numbers from the IDC, as well as Counterpoint. The IDC’s numbers are corrected somewhat, with MediaTek holding 48.1% of the US market, and Qualcomm at 43.9%. Counterpoint’s numbers, meanwhile, put Qualcomm at 55% and MediaTek at just 37%. It’s unclear why the numbers from these two respected firms vary so greatly.

Qualcomm, responding to claims that MediaTek is more popular in the United States, disputes the statistic and references Counterpoint’s numbers. MediaTek said it “trusts the accuracy” of the IDC report.

Notably, both the IDC and Counterpoint agree that Qualcomm was ahead for the year as a whole, but these numbers focus specifically on Q4 2021.

IDC (via PCMag) reports that 51% of all Android phones sold in the US are now powered by MediaTek chipsets as of Q4 2021. Qualcomm currently holds 47% of the market, while Samsung and “other” chips — such as Google Tensor — make up the remaining 2%.

MediaTek’s marketshare skyrocketed to this new number one position, too. At the start of 2021, the chipmaker only held 29% of the market dominated by Qualcomm, but that number rose by 5% by Q2, 7% further by Q3, and another 10% in Q4 of last year.

The reason for that speedy growth is the popularity of mid-range and budget-focused Android smartphones such as the Galaxy A32 and A12, T-Mobile’s Revvl phones, and more. These make up a large portion of Android smartphone sales in the United States. iPhones tend to dominate high-end sales, where Qualcomm chips are still overwhelmingly popular thanks to their network support.

That’s something MediaTek is also apparently looking to change, as the chipmaker has just been given certification for millimeter-wave — the super-fast 5G pushed by Verizon and other US carriers — from “a major US operator.” MediaTek says this means mid-range mmWave-capable phones will be coming to the US later this year with MediaTek chips. As PCMag points out, that’s especially important for sales on Verizon, where mmWave is all but required for the carrier to sell a smartphone nowadays.

While the chipmaker is mostly known for offering more affordable low-end and mid-range chips, MediaTek has also been pushing further into the flagship space. The MediaTek Dimensity 9000 holds its own compared to the Snapdragon 8 Gen 1, and the new Dimensity 8000 is looking to provide performance similar to but faster than the Snapdragon 888 for phones in the $400–$700 range. The Dimensity 1300 was also recently announced with stronger performance compared to its popular mid-range predecessor.