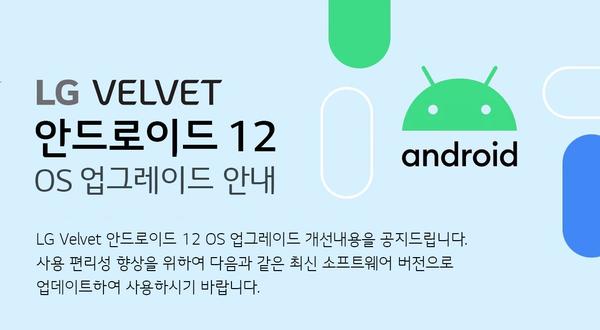 As expected, the LG Velvet is the first LG smartphone to be called up to Android 12. Unfortunately, LG limits Android 12 to South Korean handsets, currently. Based on previous rollouts, it could take months before LG releases Android 12 for the LG Velvet in other markets, such as North America. Additionally, the equivalent update for the LG Wing could remain in development for months longer too, even South Korean models.

According to LG's changelog, it has added all core Android 12 features, such as the ability to see when your camera or microphone is being used. LG has published all the changes that its Android 12 update makes to the LG Velvet in an infographic, embedded below. Seemingly, LG has not added any custom features, which posts on r/LGVelvet demonstrate. Often, LG buries any notable changes without making a fuss about them, so there could be a few alterations somewhere.

Purchase the LG Velvet on Amazon

SurveyJoin our Support Satisfaction Survey 2022: We want to hear about your experiences!Participate hereThe LG Velvet is set to start receiving Android 12 within the next few weeks03/01/2022The LG Wing on Verizon finally starts to receive Android 1112/18/2021LG's Mobile Developers site will shut down for good in December 202112/06/2021The LG Wing finally starts receiving Android 1111/01/2021LG wins the contract to make the periscope lenses for the iPhones of the future10/25/2021The LG Wing is still on the July 2021 security patch and Android 10 as it nears its first anniversary10/11/2021LG readies crease-proof material for foldable displays09/07/2021Despite backlash, LG is going to sell iPhones and other Apple products after all07/21/2021LG holds off on its plan to sell iPhones in South Korea07/11/2021LG updates the Q92 5G to Android 1107/01/2021LG plans to sell iPhones in its South Korean physical stores, against Samsung's wishes06/26/2021LG Velvet 2 Pro hands-on highlights what might have been for LG's final flagship smartphone06/23/2021The LG Velvet LTE gains Android 11 in South Korea; OS upgrade slips for it, the G8S ThinQ and G8X ThinQ in other markets06/17/2021