Apple released iOS 15 on Monday, and in the time since, the software update has reportedly seen lower adoption than iOS 14 following its launch last year. 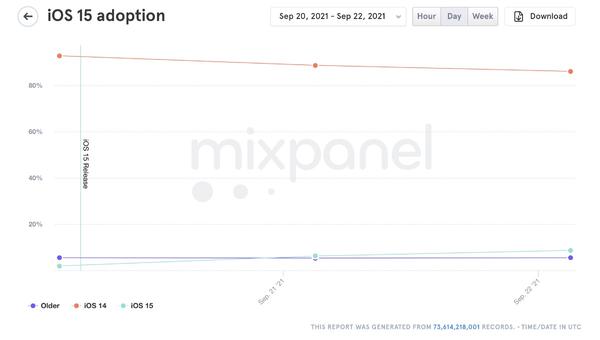 According to analytics company Mixpanel, around 8.5% of users installed iOS 15 as of Wednesday at 12:00 a.m. Eastern Time, compared to around 14.5% for iOS 14 as of midnight on the second day after that software update was released.

Mixpanel measures iOS adoption based on visits to websites and apps that use its mobile analytics SDKs, so the data is not official. Apple has yet to share iOS 15 adoption stats, having last reported an 85% adoption rate for iOS 14 back in June.

Earlier this year, Apple announced that iPhone users who remain on iOS 14 now have the option to continue receiving important security updates, so this change is likely contributing to iOS 15's lower adoption rate seen by Mixpanel so far.

Updating to iOS 15? Make sure to check out our collection of guides and how-tos for iOS 15, as well as our list of the best iOS 15 features.