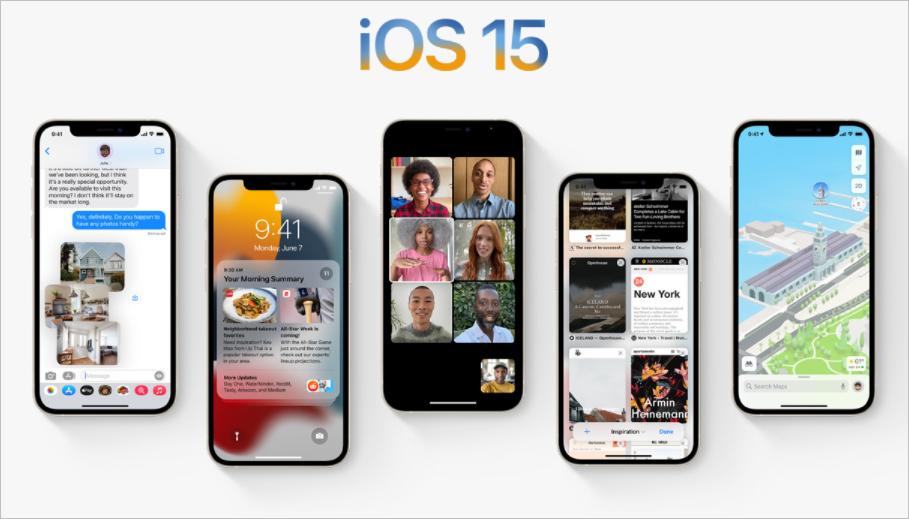 After iOS 14 shook up the iPhone’s interface with stackable widgets and an app library, iOS 15 at launch didn’t seem so dramatic. Given that several major features, like SharePlay, were delayed, little seemed different from the public beta. But now, with iOS 15.1, everything seems to be in full working order. It’s time to put Apple’s latest mobile OS through its paces.

We had to wait until iOS 15.1 for SharePlay — one of the few significant features inside this otherwise quiet update. All things SharePlay are underpinned by the FaceTime app. We have a guide to using SharePlay right here, but the major point is that not all apps are compatible.

You need to start a FaceTime call before doing anything SharePlay. Then, once connected to someone, you can open a supported app and you'll see an alert at the top of the screen asking if you want to stream your content to your FaceTime contact. They will then see a pop-up, asking them to join you.

Shared shows and content are impressively lag-free and can be navigated by anyone watching, so your friends can pause a TV show if they need to make a snack run. A picture-in-picture box offers a view of all the callers. It’s a little tight on an iPhone, but works well on Apple TV and iPads. When shows offer multiple subtitles and audio options, everyone can listen/read in their chosen languages.

There are also a few games compatible with SharePlay, but you’ll probably tend toward the free-to-play options, like the charades-based game, Heads-Up. (Testing it out with other Engadget editors was far more fun than it had any right to be.)

Fitness Plus, Apple’s on-demand workouts service, also works with SharePlay. Of course, you’ll need an Apple Watch to participate, but it’s a fun way to share a workout, and have someone to complain along with you. The app did an excellent job dipping out the Fitness Plus audio when my companion talked. Sometimes it’d pick up ambient noise, like distant door slams, but it was cool to be able to hear that someone else was sweating (and swearing) along with me, while still being in the privacy of my apartment.

Unfortunately, your favorite streaming service may not work on SharePlay. There’s currently no YouTube or Netflix, but Apple has managed to rope in TikTok, HBO Max, Hulu, Showtime, Paramount Plus, and the NBA. There are some third-party fitness apps (including SmartGym), but nothing hugely notable.

There is potential here, I just wish this feature weren't joined at the hip to FaceTime. I would have appreciated the ability to SharePlay from say, Apple TV+, and then put in the details of whoever I wanted to share with once I’d picked something — That order would make more sense.

While I might not be a FaceTime regular, I can appreciate the upgrades in iOS 15. For example, you can share your FaceTime calls beyond Apple’s walled garden, to anything with a web browser. This works best on Apple devices, but it’s relatively stable compared to the open beta we tried earlier this year. You’ll also immediately notice the new grid view that brings Apple up to parity with other video call services, like Google Hangouts or Zoom.

There’s also spatial audio, which makes each person on your FaceTime call sound like they’re coming from a particular direction. It’s not life-changing, but it’s a nice flourish. What’s even better are the new voice isolation and wide modes, the latter of which intentionally draws in more ambient noise. Those are also available outside of Apple’s own video call app. I inadvertently turned it on for some WhatsApp video calls with family while trying to console a cranky toddler — the caller had no idea that my niece was having a complete meltdown. Naturally, noise-cancellation effectiveness can vary, but I generally found it impressive.

Apple’s attempt to help us claw back some of our life from our smartphones is a welcome one. Compared to Screentime, which came along with iOS 12, Focus seems more robust. It’s better equipped to help you steer away from your phone, and less about telling you about what you already know — you spent over 40 minutes reading Reddit when you should have been sleeping. 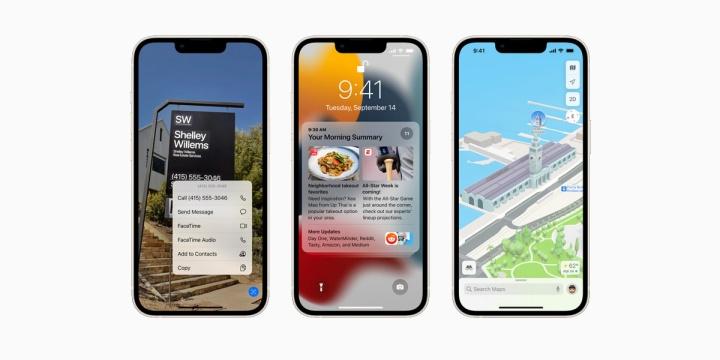 Focus offers multiple different profiles, evolving the single Do Not Disturb toggle from before. There are three placeholders to start with: Work, Bedtime and Personal, but there’s no stopping you from adding more focus modes to cover perhaps, gym trips or when you offer your phone to your kids.

There’s also a toggle within the Focus menus that allows compatible apps (there aren’t many) to notify anyone trying to contact you that messages were “delivered quietly.” If it’s very important, they can “send anyway” and it’ll still ping you. Of course, this is only when dealing with iOS users. Android users won’t have any hint that their message won’t be read.

In iOS 15, you can automate the transitions so that your device ‘locks you out’ when you should be filing your review draft and not mired in the latest Apple Arcade game. This can be based on location, time or even on AI smarts. The phone learns from when you manually switch between modes and will suggest the same transition, hopefully, before you do it yourself.

Inside the Focus settings, you can approve both apps and contacts. If they’re not on the list, notifications are corralled away until you swap modes.

You can also use Focus modes to customize your interface. Inside the settings for each mode, you’ll need to make each new home screen page as an additional panel. Once enabled, you’ll only see the panels enabled in that particular Focus mode — though the app drawer is always just a few swipes away…

If it’s any kind of endorsement, I set up a ‘sleep’ focus mode that interrupts messages and most things after 10 PM, protecting myself from some of the chaos of an international Engadget team and friends that are very much night owls. So far, it’s worked well.

Apple’s machine learning takes a few moresteps forward in iOS 15. They’re small additions, but they point to where Apple is taking its mobile OS.

A handful of them are based on imaging. Visual Look-up will, er, look up photos on your iPhone, identifying people, places and more. It’s something that Google’s done for years on Lens — which you could also have used on your iPhone.

Live Text is a little more compelling. It can identify and pull text from a photo, which you can then paste into emails or notes. You can even translate this text in real-time, making it useful for menus and signs as we gradually venture beyond our own borders again.

Spotlight in iOS 15 has also been given some machine-learning smarts. You can now search your Photos app without having to open the app. Type in "dog," "ramen" or "baby" and you’ll see your own images of whatever you type in, if you have them. This also works for people, if you’ve assigned their faces to photos. Even more impressive, it’ll search the text within your photos, although I haven’t needed it yet. This can backfire, though: I have a photo of a Lulu Lemon tote bag (don’t ask), which is covered in random words. Apple has indexed all of them.

Across iOS 15, you’ll notice a new “Shared with You” section that’s based entirely on your Messages app and what content and links people have sent you. You’ll see it across Safari, Photos, Podcasts, Apple Music and more.

Any content that someone shares with you on Messages will populate in the corresponding app. It works seamlessly, but it’s also only for all things Apple. I got the most use from sending and receiving photos, but I could see the utility being heavily tied to how many of my friends and family are watching TV Plus — or are iPhone users to begin with.

Safari got some surprising changes too. Yes, the address bar has now been relocated to the bottom of the screen — closer to fingers on ever bigger iPhones. While it takes a while to remember that’s where the URL box lives now, it makes sense. And, if you absolutely can’t tolerate it, you can turn off this design change. It’s a rare bit of flexibility from Apple.

Safari on iOS 15 also introduces extensions, like Safari has on Macs. Sadly, the best extension (and the only one I’m using) is Noir which tries to force a ‘dark mode’ effect on any websites you browse on Safari. It’s another area that could be more compelling in a year’s time.

Many of Apple’s other apps have picked up subtle upgrades too. Apple Maps continues its slow path to redemption with improved transit instructions and augmented-reality walking instructions. There’s a deeper level of detail for several cities, including New York, San Francisco and London, including bike lanes.

With the Weather app, you can now set up notifications for when it’s about to rain or snow, borrowed from Dark Sky, a weather app that Apple recently bought. And the Health app does a better job of notifying you of trends, like weight and physical activity. This week, I got a notification saying that my VO2 levels have improved since taking up daily HIIT classes, meaning that regardless of weight loss or what I see in the mirror, my cardiovascular system is getting stronger.

If you’re paying for iCloud, or Apple’s One service, you’ll get a few extras with iOS 15. It now includes a baked-in private relay that will scramble traffic at both ends of your internet connection — iOS will flag when it is turned on or off. It’s useful simply because it’s so entrenched within the OS, with no need to toggle it on or off. The paid-for service also adds the ability to make your own “burner” email addresses that auto-forward to your main email account. These work in places where the Sign in with Apple feature, which does a similar thing, isn’t supported.

Like iOS 14 before it, Apple supports devices from the iPhone 6s onwards, including the first iPhone SE and the 7th generation iPod touch. However, some features, especially ones that rely on AI and machine learning, depend on more modern mobile chips. You’ll need a device with an A12 chip, first used in 2018’s iPhone Xs, to use FaceTime’s new voice-isolation mode, spatial audio and its blurred-background Portrait mode. Offline Siri support and further Siri performance upgrades also need the same A12 chip or newer. The fancy cinematic video recording mode also remains exclusive to the iPhone 13 Pro models.

iOS 15 is a quiet update. It can be hard to spot what’s changed unless you’re actively seeking out the differences. This isn’t a getting-rid-of-the-home-button edition of iOS. Instead, Apple is both focusing on sharing as a way to court people outside of iOS while keeping those already committed to its apps deeply entrenched.

With FaceTime web links, SharePlay and those new Shared With You sections, the company is coaxing you into sharing photos in Messages, stretching in a Fitness Plus yoga session with friends, or watching the latest season of Ted Lasso with family hundreds of miles away.

Apple wants you doing all those things Apple’s way, instead of through WhatsApp, Netflix or Peleton. That’s still a big ask, but Apple has weaved all these often disparate parts together so well that it’s easy to see what it’s trying to achieve, even if the content or flexibility isn’t quite there.