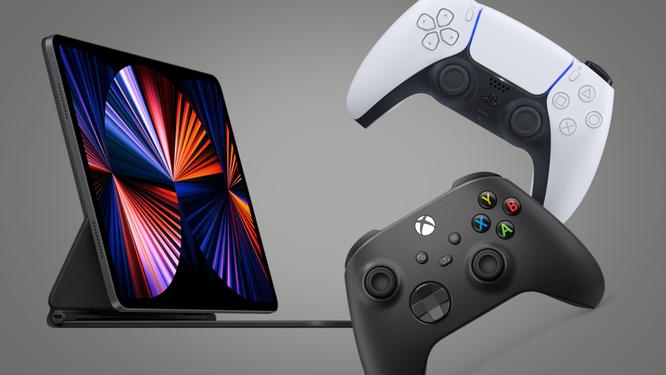 Gaming on iPad: everything you need to know about the services available

The ability to game on an iPad has exploded in recent years, thanks to the advancements in cloud gaming and streaming technology. We have plenty of services available now, which can allow you to play through whole Xbox and PlayStation catalogues directly from your iOS device. With so much support, then, it's easy to see why the iPad is starting to take form as one of the best gaming tablets on the market - but where do you start?

If you're looking to get more out of gaming on iPad, there are four services you need to know about; Xbox Cloud Gaming, PlayStation Remote Play, Apple Arcade, and Google Stadia. By cherry-picking among these platforms, you can play the latest and greatest titles all from your iPad - with everything from heavy-hitting AAA releases to the smallest of indie games up for grabs.

You'll need your PS4 or PS5 console nearby, but if you've been beaten to the TV you can play your games on iPad. Again, you'll need a sturdy enough internet connection (and we'd recommend hardwiring your console in), but you'll have full access to your console streamed through your iPad display once you're all set up.

First, you'll need to switch Remote Play on from the Settings menu on your console. After that, you'll need to link your device to your PlayStation. After clicking the "enable remote play" button in settings, head to "link device" and you'll receive an 8-digit code that needs to be entered into the PS Remote Play app on your iPad. After that, you're all set up, though for future sessions you may need to sign in to your PlayStation Network account to connect to your console again.

You can connect your DualSense controller to your tablet by holding the PS and Share buttons at the same time until they flash and then pairing in the iPad's Bluetooth settings menu.

Apple's own iPad gaming service doesn't feature as many blockbuster titles, but if you're looking to sample some smaller mobile games without ads or payment locks there's nothing comparable on the market. Apple Arcade functions as a subscription service to free apps, which means you'll be downloading your games as usual - but from a dedicated section of the App Store.

Not all Apple Arcade games are compatible with a controller, but there are plenty of experiences that take input from a range of gamepads. You're not tied to a particular brand's thumbsticks here, either, as the iPad is compatible with the majority of Bluetooth controllers on the market.

Google Stadia hasn't had a brilliant time since its release. The game streaming service promised a lot in its early days and hasn't quite lived up to those promises for many since. However, it's surprisingly nimble when paired with a high-quality iPad and a solid WiFi connection - and there are plenty of titles to enjoy as well. Cyberpunk 2077, Destiny 2, FIFA 22, and Red Dead Redemption 2 are all fully playable on iPad with Google's service.

You'll be accessing Google Stadia through a webpage shortcut, which will then stream all your favorite games in Safari. Confusingly, there is a Stadia app on the App Store, but this is only used for managing your library and connecting controllers. Even more confusing is the Google Stadia structure.

Put simply, Google Stadia itself is simply a storefront like Epic or Steam - you'll still need to buy your games individually. However, you can also sign up to Stadia Pro for a few free games each month. It's not the most cost-effective way to play video games on your iPad, but if you don't have a PlayStation and don't want to pay the recurring Xbox Game Pass price, it's the last option out there.

You can use your Xbox One or PS4 controller, paired through the Bluetooth section of the iPad. Or, you can connect through WiFi using the official Stadia controller.

If you're set on picking up an iPad for your everyday gaming, we'd recommend checking out the latest iPad Pro deals, iPad Air deals, and cheap iPad Mini prices for more savings on your small-screen setup.