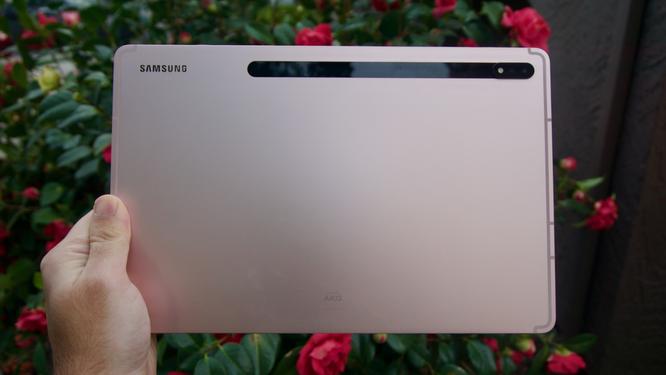 Last week, I argued that Samsung has a mid-range tablet problem, as it lacks a proper middle-tier competitor to the new iPad Air below the Galaxy Tab S8. Based on the iPad Air 5 reviews pouring in, including a glowing one from Luke Filipowicz at our sibling site iMore, Apple's new tablet has lived up to lofty expectations in its affordable, killer performance. It's basically the iPad Pro Lite.

And as Luke pointed out in his review, if you "like colors," you'll prefer the iPad Air to the more expensive Pro.

"I love the purple colorway on the Air, and it is so much more fun to look at than just some big black or silver boxes that the base iPad and iPad Pro models offer," he explained.

Apple often sells vividly colorful tech, with the iPad Air 5's non-gray colors — pink, purple, blue, and starlight — as a perfect example. But it has a "No fun allowed" policy towards designing most of its premium devices. One that Samsung arguably shares.

Apparently, if you offer a MacBook Pro or iPad Pro in any color besides Silver or Space Gray, professionals will revolt en masse and decide they're not businesslike enough for work? I've never understood the logic, but the strategy only makes the iPad Air more appealing.

Samsung followed in Apple's footsteps by only releasing the laptop-replacing Galaxy Tab S8 Ultra in one color, Graphite. In theory, as a desk-only tablet that's constantly attached to a book cover, the back color doesn't matter so much.

As for the other Galaxy Tab S8 and Galaxy Tab S8+ colors, Pink Gold and Silver, Samsung designers obviously picked them for their serious professionalism. They're understated, near-white tints that make minimal impact. And while you will use them with a keyboard cover, they're also designed for portable use. Especially the base Tab S8.

Not much has changed since the 2020 Tab S7, which also launched in three colors: Mystic Black, Mystic Silver, and Mystic Bronze. And quite honestly, the Bronze S7 looks remarkably similar to the Pink Gold S8 if you put them side by side. Samsung only added some real color to the Tab S7 lineup when it released a beautiful Mythic Navy variant about half a year later.

Following that line of thought, I'm waiting impatiently for Samsung to release more colors for its Galaxy Tab S8 lineup. Samsung has a history of following in Apple designers' footsteps — look at the iPhone 13-esque Galaxy S22 phones and the Tab S8 Ultra notch, most recently — but I believe it should emulate the vibrant iPad Air template, not the businesslike Pro template.

Samsung knows how to incorporate color into its designs properly, but it does so with its Galaxy phones, not its tablets. Across all three S22 phones, you'll find variants in Green, Cream, Sky Blue, Violet, Pink Gold, Graphite, Red, and Burgundy. The Galaxy Tab S8 would look gorgeous in Green or Burgundy, at least in my opinion. Instead, you get near-black, light gray, and pink lemonade.

So I don't understand why tablets don't get the same love and care when it comes to colors. Even Samsung's budget tablets like the A8 and A7 have the same static color options: gray, silver, and some gold/pink option. Only the Galaxy Tab S7 FE has launched with a fourth color (Mythic Green) in recent memory.

I find it ironic because while about 9 in 10 people use a phone case, I suspect more people use their tablets uncovered, making its color more relevant. And yet, in most cases, brands will offer a few color options at most, one of which is always black.

Striking colors make an expensive device feel less impersonal and more tailored to your tastes. Even if Samsung makes them limited-stock, samsung.com exclusives like it does with its Galaxy S phones, I've no doubt they would sell. Tab S8 preorders doubled Tab S7 preorders, and even if they're the best Android tablets around, I can't be the only one craving more variety.

Soon I'll have to return the Galaxy Tab S8+ that Samsung lent me for my review, and I'm strongly considering shelling out my own money on a new one at that point. But I'm also holding out hope Samsung will release it in better colors first.