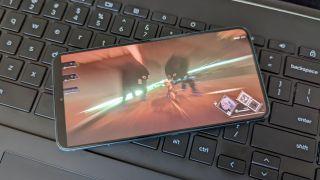 We want better smartphone battery life, but also give us good performance

What do we want? Better battery life! When do we want it? Yesterday!

Following Samsung's Galaxy S22 throttling debacle, we asked our readers if they'd choose better performance or better battery life in their smartphones. We received more than 1500 responses, and of them, nearly 75% voted that they'd rather have better battery life.

The result is not too surprising. In my Galaxy S22 review, I complain that one of the few downsides of the phone is that I don't get very much screen-on time. That said, the phone performs well, despite the reports of throttling. Still, the phone doesn't have the fastest charging around, so it makes sense that users would want better battery life if it means not being tethered to a charger all day.

While many commented that they prefer battery life, some pointed out that performance is only important for a certain subset of smartphone users such as gamers:

Plenty of gaming phones like the RedMagic 7 allow users greater control over how their devices perform, particularly when playing video games. These phones also come with large batteries and some of the fastest charging speeds around, so even if battery life isn't great, you'll be able to quickly top up to get back into your session.

Many reader responses point out that we should be able to get both great battery life and great performance, particularly if we're paying flagship prices for the best Android phones:

Samsung is now rolling out an update to GOS that will allow users to select performance as a priority if they don't want their gaming apps throttled. However, Samsung maintains that it does not affect the performance of non-gaming apps, despite reports suggesting otherwise., Still, now users will have more control over their performance and battery life.

Derrek LeeDerrek is a long-time Nokia and LG fanboy who loves astronomy, videography, and sci-fi movies. When he's not working, he's most likely working out or smoldering at the camera.TopicsPollSamsung Galaxy S22Android Central Newsletter

Get the best of Android Central in in your inbox, every day!

Thank you for signing up to Android Central. You will receive a verification email shortly.

There was a problem. Please refresh the page and try again.